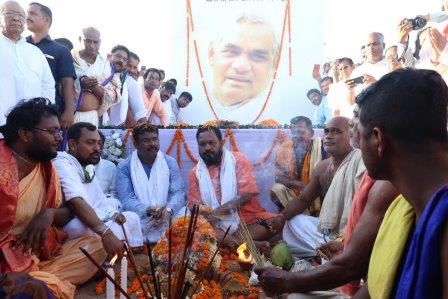 Bhubaneswar: The ashes of former Prime Minister Atal Bihari Vajpayee were immersed in the Bay of Bengal at the pilgrim town Puri on Thursday.

As part of the BJP’s ‘Asthi Kalash Yatra’ across the country, urns containing the ashes of Vajpayee were brought by state BJP president Basant Panda to Bhubaneswar on Wednesday.

The urn carrying ashes of Vajpayee was taken in a grand procession from BJP’s state headquarters in Bhubaneswar to Puri as hundreds of people joined to witness the immersion ceremony.

BJP has decided to organise an all-party prayer meeting on August 24 in Bhubaneswar in memory of the great leader.

According to sources, Chief Minister would attend the memorial service for Vajpayee to be held at Idco Exhibition Ground on Friday.