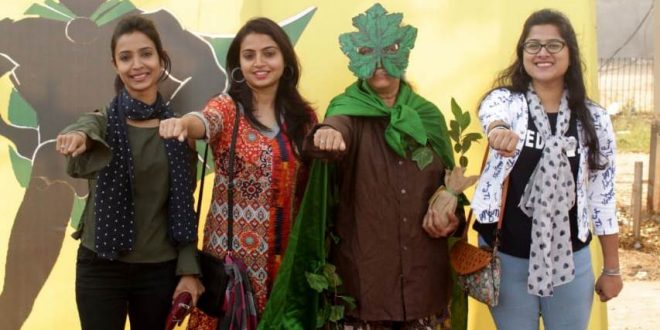 
Bhubaneswar: Showcasing the rich ecological tourism sites and biodiversity hotspots and wildlife treasure, 80th Patha Utsav organised all its events centred around ecology, wildlife and environment and tourism on Sunday.

The theme was Eco-tourism of Odisha-the Soul of Incredible India.

The Itishree Dixit and group created a beautiful Rangoli depicting the rich biodiversity and ecotourism wealth of the State and how its is attarcting a large footfall of visitors on this account.

It is pertinent here to mention that ecotourism destinations across the State have created a niche in the minds of nature lovers.

Dedi Loku, the costumed green superhero, wearing a green cape and a mask, returned to 80th Patha Utsav. Dedi Loku, which means TreeMan in the Kui language of Odisha spoken by the Kondhs, was seen engaging with people at the Bakul Library on the Road.

Dedi Loku said that she had returned to Patha Utsav as the theme this time had been on promoting EcoTourism and conserving forests.

She was assisted by volunteers of Bakul Foundation, who responded to the curious onlookers and urged them to get themselves clicked with Dedi Loku, who talked to them about the urgency to save the planet and urged them to adopt the simple practice of gifting a plant on any occasion.

Volunteers of Bakul Foundation also showcased different options of packaged gift plants to show how a plant gift can be as attractive as a bouquet and contributed to the environment.

Dedi Loku asked everyone to join her in the movement to save the planet and invited them to meet her on her visits to Patha Utsav and Bakul Foundation. It is interesting that Dedi Loku is gender neutral and sometimes appears as a woman and sometimes as a man.

The Bakul Library on the Road also had a special curated section designed around EcoTourism and Saving the Environment.

Prachitara performed on the main stage on a story ‘The Woodcutter and Tree’. During her second storytellinmg session at Patha Utsav on stage she nerrated how the tree gave him fruits as long as he took care.

After the woodcutter becomes rich, forgot about the tree in the jungle. Due to severe loss in business when he again visited the jungle to get fruits from the Tree, he found it in dying condition. Finally the tree dies as did not get care. The woodcutter realises his mistake.

City based welfare and social service organisation Helpmate organised an event with display of rare photographs representing visits of Mahatma Gandhi to Odisha at various occasions and how during the gatherings the Father of the Nation spread the message of cleanliness and environment  friendly behaviour by the public as he had emphasized cleaning of venues after the meeting.

Nibedita Bhanja from Helpmate said, “Mahatma Gandhi visited Odisha on seven occasions and always tried to spred the message of animal welfare, envirinment-friendly beheviour by citizens and respect towards Nature.”

A total of 110 species of reptiles including three crocodilian species, 20 species of amphibians, 479 species of birds, 86 species of mammals have been recorded so far in the State.

Eco-tourism means at enjoying and experiencing the nature without destroying its biodiversity. Keeping this in mind PECUC during today’s Patha Utsav celebrated Ecotourism of Odisha-the Soul of Incredible India.

The children in PECUC’s space observe this day by giving awareness message about saving our specious forests, wildlife reserve and water resources along with its unique biodiversity.

A quiz competition among the children organized to enhance their knowledge about our land. Children were very enthusiastic to participate in art, quiz and various cultural programme at PECUC’s Children Corner.