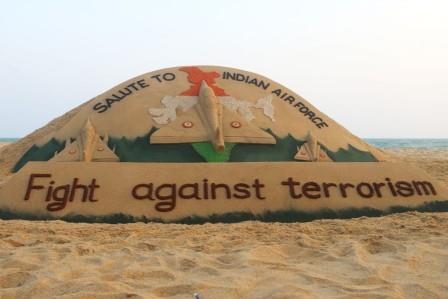 Bhubaneswar: The Odisha cabinet on Tuesday passed a resolution praising Indian Air Force for its pre-dawn air strikes on terror camps across the Line of Control (LoC).

“Chief Minister Naveen Patnaik moved a motion in the cabinet today praising the action of Indian Air Force to protect our country. The cabinet unanimously adopted a resolution to this effect,” said a statement from Chief Minister’s Office.

“I salute the Indian Air Force for having taken action to protect our country,” the CM had told the reporters earlier.

Meanwhile, sand artist Sudarsan Pattnaik created a sand sculpture to salute the Indian Air Force with a message “Fight against Terrorism” at Puri beach in Odisha on Tuesday.