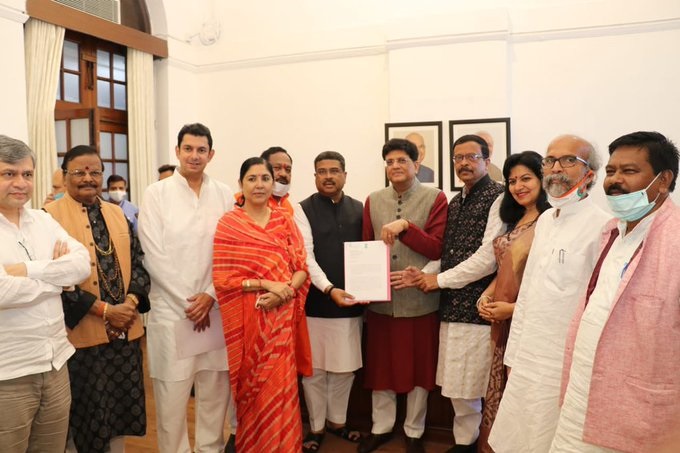 
Bhubaneswar: BJP MPs from Odisha on Tuesday met Union Consumer Affairs Minister Piyush Goyal in New Delhi and sought his personal intervention to direct the state government to expeditiously complete procurement of unsold paddy for the welfare of farmers in the state.

It came a day after BJD MPs met the Union minister and placed demand for expediting lifting of paddy evacuation and to clear pending subsidy to Odisha.

The BJP delegation, in a memorandum, also sought support in resolving several issues related to paddy procurement in Odisha, including streamlining the entire process to ensure smooth, transparent and quick procurement of paddy at MSP for the benefit of paddy farmers in Odisha.

“The State Govt is misleading the farmers on issues of paddy procurement and has been conveniently trying to belie its own systematic failure in governance and in providing allied agricultural services to Odisha’s farmers,” said Union Minister Dharmendra Pradhan, who was part of the delegation.

Despite this years’ better-than-expected harvest of paddy due to a favourable monsoon, farmers in Odisha are suffering due to State Govt. apathies, administrative inefficiencies and long-standing malpractices, he said.

“As a result thousands of farmers were left with unsold paddy which they had to sell at half the price of MSP fixed by the Centre, i.e ₹1868 per quintal. Farmers are also being forced to sell their harvest at throwaway price due to administrative failures of the Odisha Govt,” said Pradhan.

The delegation sought the necessary support from the minister in assessing the unethical abuse of authority by Odisha Govt. in paddy procurement.