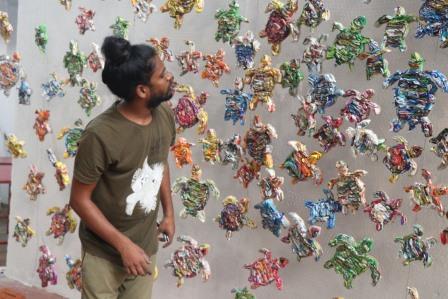 
Bhubaneswar: On the closing ceremony of the METIS Initiative-2021 on Plastics and Indo-Pacific Ocean 2021 at Utsha Foundation here this evening, the grant-winning artist Manveer Singh shared his experience at the month-long residency and also displayed a short film on his journey in Odisha in transforming his ideas to create beautiful art from plastics.

Today’s installation by Manveer at Utsha created a wall of Olive Ridley turtles hanging from the net. The artist has the concept to tell to the visitors how human activities like fishing are killing the turtles.

The tiny ones consuming plastics are also facing life threats near the coastline and especially adjacent locations near the mass nesting grounds. The work today at Utsha, thus explained all the challenges behind the lifecycle of the Olive Ridley turtles, which are in love with the Odisha coast.

Congratulating Manveer, the Consulate General of France Talpain said “This artistic food for thought is the reminder that art and artists have the power to influence the way we think about the environment. I strongly believe that artists have the power not just to raise awareness about critical issues, but their work is also the key to creating real world impact.”

Delhi-based artist Manveer Singh’s concept “From Plastic to Art” was selected from 26 applicants. During his stay for the Utsha Residency in association with AFD, Manveer visited various institutions and offices and distributed 40 habit changer boxes to collect the layered plastics to make the tiny turtles for his artwork.

The workshop was organized at BDA City Centre (NICCO Park) where the Quick Win project under City Investments to Innovate, Integrate and Sustain (CITIIS) is under implementation in Bhubaneswar.

Manveer also conducted a workshop for students at Unit VI Girls High School in which 50 students participated. He also interacted with more than 15 families residing in Government quarters near Utsha Foundation. His installation on Puri sea beach also attracted more than 5,000 visitors on November 24.

The artist, popularly known as “Plastic Wallah’’ in Delhi, has dedicated his works in creating awareness on the menace of plastics in and around human habitations. However, as the marine ecology is going to be severely affected by plastics by 2050, the artist feels, the awareness level should also get more attention so that the oceans and their ecosystems would be less affected by plastics and their derivatives.

The METIS initiative is part of AFD celebrating its 80th Anniversary on December 2, this year and for this the agency has planned events across the Indo-Pacific Region including India, Mauritius and Indonesia. AFD has decided to launch a global initiative METIS, to create a global public opinion on marine debris and pollution.

While this has encouraged the participation of artists in India to express their ideas relating to plastic waste production, management and its ill effects on the fragile coastal ecosystem, in Mauritius and Indonesia music and comics respectively were used to create the public awareness.