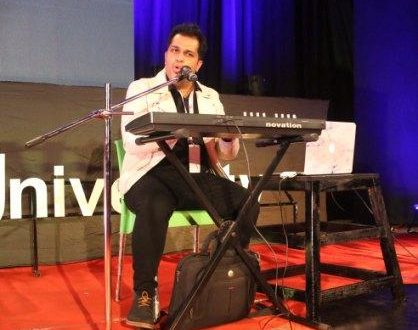 
Bhubaneswar: Nilesh Ahuja, the dynamic and versatile Bollywood music composer and singer who broke records with his chart-buster ‘Thoda Thoda Pyar Hua Tumse’, has described it as the most important song of his career till now.

The song, released during the Valentine’s Day in February last featuring Siddharth Malhotra and Neha Sharma, crossed over 350 million views. Singer Stebin Ben had lent his voice to the song.

“It has been the most special and important song of my life till now,” Ahuja, who spoke at a TEDx event held at Siksha ‘O’ Anusandhan (SOA) on Sunday, said.

The writer of the song and celebrated Bollywood lyricist Rakesh Kumar, popularly known as ‘Kumaar’, was also part of the TEDx event.

Addressing the students, Ahuja—who sang the number for the benefit of the audience, said he was interested in music since his school days and regularly participated in musical events in Delhi. “I began to participate in major festivals across the country and realized my calling was music,” he said adding he learnt Indian classical music and did a course in music production.

In Mumbai, Ahuja said, he received great support from lyricist Rakesh Kumar who appreciated his songs. “Kumaar paaji has been my mentor and driving force,” he said.

Ahuja said he was thrilled when he found ‘Thoda Thoda Pyar’ was trending No.2 on YouTube the very next day it was released. It broke records. The musician said he was a lover of nature and was attracted to the seclusion of the mountains where he composed his songs.

Kumaar, who is known for his songs including ‘Rula Ke Gaya Ishq’, ‘Baby Doll’ and ‘Sooraj Duba Hain’, was the recipient of Listeners’ Choice Song of the Year award in 2016 for the song ‘Soch Na Sake’ from the film ‘Airlift’.

The lyricist recounted his struggle to emerge as a lyricist in Bollywood while urging the students to be creative.