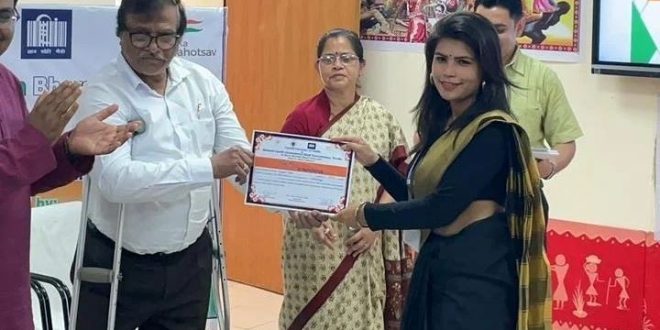 
The Central University of Odisha and Mahatma Gandhi Antarrashtriya Hindi Viswavidyalaya, Wardha jointly organized the Ek Bharat Shreshtha Bharat under the ‘Azadi Ka Amrit Mahotsav’ Week from February 24- March 15, 2022 as per the directive of the Ministry of Education, Government of India. Under this program, the students of both Universities were engaged in exercises like Webinar, Film Festival, Cultural Performance and Video making on places of historical importance in blended mode as per the guidelinesof the Ministry of Education. On this occasion, students from both the Universities celebrated the Valedictory Session of the programme with a Webinar on “My state: My culture”on 15th March 2022.

The programme commenced with Saraswati Bandana by Miss Anwesha Panda, PhD scholar of CUO. The Welcome Note was delivered by Dr Sourav Gupta, the Nodal Officer, EBSB, CUO where he gave a brief summary of the journey of both the Universities under EBSB since 2018 and thanked the Vice Chancellors of CUO & MGAHV, Wardha for their guidance and support towards the programme. The Inaugural Address was given by Prof. Rajaneesh Kumar Shukla, Hon’ble Vice Chancellor, MGAHV, Wardha, tracing the journey from Kanyakumari to Kashi; he focused on how we all are trying to comprehend the culture in the form of food, art, clothing, language and many other aspects. He said that as Indians we should stand together every single day of the year the way we stand together when we are in crisis. He pointed construction and manufacturing are just manmade and are not part of the natural process. And India is together because of its culture or else how it would have survived with such a vivid culture when countries like USSR fell so easily. He urged the students of both universities to imbibe the spirit of EBSB and become good citizens. He concluded by thanking the dignitaries and the students of both the universities and quoted for future congregations like this.

Prof Kailash Pattanaik, former Head and Professor, Department of Odia, Vishva Bharti, Shantiniketan was the Resource Person for the webinar talk titled, My State: My Culture. He gave a vivid description of Odisha and its culture. He threw light on how important it is to safeguard endangered culture and about the significant steps taken by UNESCO and UGC. Giving a description of tangible culture and intangible culture, he explained how culture is formed in a country. He talked about how the generic culture, popular culture and traditional culture are mingling to form a cross pollination throughout the country. He wrapped up with his words on how culture has taken a second birth and the identity of original culture is taking a new form.
Then the program went forward by the presidential address by Prof Sharat Kr Palita, Hon’able Vice Chancellor, Central University of Odisha, by a note on how this valedictory function is not an end but rather a new beginning of a powerful bond between the two Universities. ‘These 15 days have bought both Maharashtra and Odisha closer than we have ever been’, he added that a united India can only give us the best India. He put light on how important it is to share our literary treasure with each other and enrich our culture together making this inherent cord even stronger. He concluded his speech by thanking CUO and MGAHV University and quoting that Greater India and unified India is only possible when we love India with all our hearts.
Giving a glimpse of the whole programme and showcasing the enriched and souvenir value of the journey that both the universities shared in these past fifteen days of the EBSB-AKAM Week, a montage of photos was played by the CUO. The programme concluded with a formal vote of thanks by Dr Priyanka Mishra, Nodal officer EBSB, MGAHV, Wardha. After closing this combined online programme with MGAHV, all the students of CUO who participated & volunteered in this EBSB-AKAM Week and all the Faculty & staff who were involved in the programme were awarded with certificates in offline mode by Prof Palita, Vice Chancellor I/C, CUO.