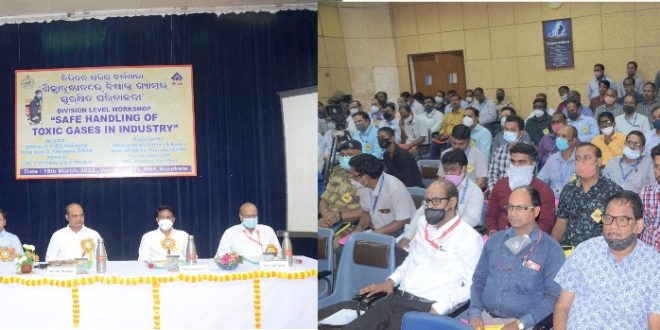 
A one day Division Level Safety Convergence Workshop on ‘Safe Handling of Toxic Gases in Industry’ was organised at CPTI on Tuesday.

In his inaugural address, Bibhu Prasad emphasised on the preparedness for gas safety emergencies and urged the industries to take measures such as mock drills and other preparatory activities to effectively meet any real time eventuality.

Speaking on the occasion S.R.Suryawanshi deliberated on the importance of gas safety in view of the increasing number of potential threats and hazards due to toxic gases in the industry. To promote an effective culture of safety, he emphasised on the role of each individual as well as the industries and the Government.

Manoj Ku. Mishra in his address described on the significance of gas safety in industries especially in the Iron & Steely industry for their sustenance. He stressed on the mission of accomplishing the Vision- Zero in the state which aims for zero fatality in industrial accidents. He thanked RSP for extending all support for organising the workshop. A Gas safety Booklet was also released on the occasion.

In the Technical sessions held later, topics pertaining to use of gas safety gadgets and equipments in steel industry, etc were discussed. B P Pandey, AGM ,Energy Management Dept.,  RSP, Rourkela made a presentation on the hazards in handling various toxic gases while Amar Bountra, VP ,Tata Steel, Dhenkanal, spoke about the good practices in gas handling in steel industry.