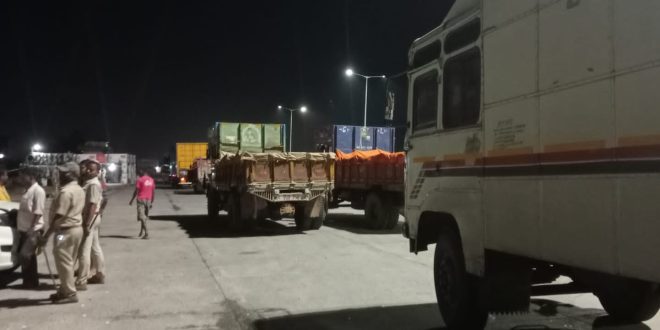 During a surprise check fitness certificate (FC) of 465 transport vehicles were cancelled and 350 vehicles were issued challans across the state for having non-functional tail lamp/ headlight or retro reflective tape.

A special drive was carried out against such vehicles on 10.05.2022 from 8PM to 6AM of 11.05.2022 across Odisha by the enforcement squad of State Transport Authority.

Retro reflective tapes are compulsory in commercial vehicles as per rule 104 to 104E of Central Motor Vehicles Rules (CMVR).

Using these tapes reduces the safety risk at night and in times of low visibility. Commercial vehicles are often found plying while flouting these CMVR.Around 2468 vehicles were checked during the special drive, out of which 406 vehicles had defective tail lamps, 34 vehicles were found with defective head lights and 128 of them had defective retro reflective tapes.

The drive was extensively carried out in regions having industrial and mining activities as it is most commonly seen that many goods vehicle plying in these region do not comply with these MV rules causing accidents during night.

Enforcement squads have been asked to conduct such drives at regular intervals. In recent past many serious accident took place in the night causing loss of precious lives.