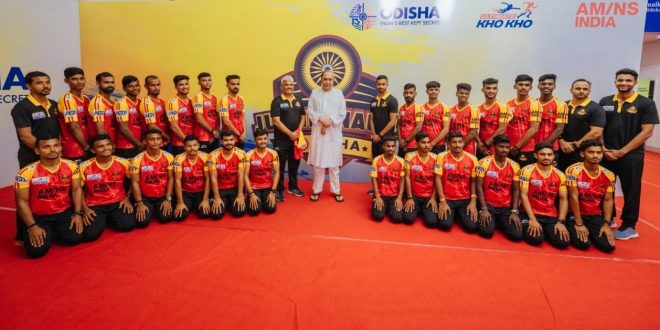 
Chief Minister of Odisha, Naveen Patnaik unveiled the jersey of Odisha Juggernauts, the state’s franchise in the first edition of the Ultimate Kho Kho League at the Kalinga Stadium, today, in the presence of the entire team, 5T (Secy), V.K. Pandian, Sports Secretary, R. Vineel Krishna, and officials of Sports & Youth Services Department.

Chief Minister interacted with the coach and team players and wished them the very for their League ahead. He said, “I congratulate and welcome each and every member to our Team Odisha Juggernauts. You all are now a part of our family and I wish you the very best for the League ahead. We, your Odia fans and supporters, will cheer for you from Odisha and hope to see you return with the coveted first edition trophy.”

Development and promotion of indigenous sports like Kho Kho has been a focus for Odisha and the State teams have performed commendably well at the National level. This venture will give added impetus to the sport in the state and draw more players especially from the rural belts, he added.

The new jersey will make its in-game debut at the first match of this inaugural season that will be played by Odisha Juggernauts on 15 August in Pune, Maharashtra.

The League that will commence from 14 August will continue till 4 September this year. The Odisha Sports Development and Promotion Company (OSDPC)-owned team Odisha Juggernauts will be the fifth franchise in the league and will be led by Head Coach Ashwani Kumar Sharma. Odisha Juggernauts comprises 25 players with 6 players from Odisha in the state franchise and 10 in the League.