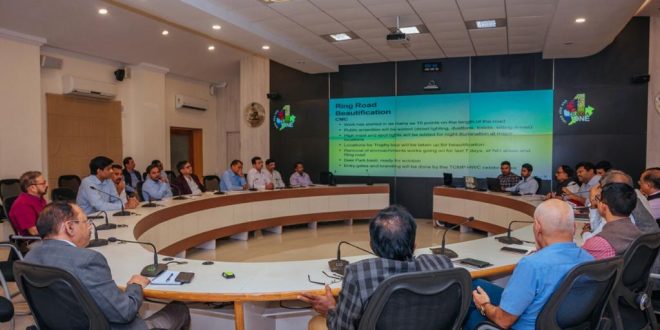 The review was intended to map the progress. All line departments including departmental heads including NHAI were part of this review meeting and updated the progress on various works related to road improvement placemaking, sanitation, art works, sculptures, landscaping, safety and discipline.

A total of 70 Sculptors are being planned this time. For the designs, BMC had initiated a massive online campaign and the suggestions by citizens are incorporated in the design language and elements for STAMP. Thus the project is envisaged as For the Citizens, by the Citizens & of the citizens.

Similarly, in the meeting, BSCL is directed to initiate massive citizen outreach activities such as encouraging private building owners for undertaking fresh coat of painting & festive lighting on all buildings at Janpath.

Additionally, BSCL is also given the responsibility of repainting of all traffic signals & ATCS including operationalizing both Multi-layer Car Parking units at Unit 2 market & Sahid Nagar.

BDA & BMC both has taken up a total of 22 locations under Placemaking Bhubaneswar & the designed has been prepared by Bhubaneswar Urban Knowledge Centre. BDA has taken up four of them where as rest are being done by BMC. The placemaking initiatives shall bring a different visual experience for commuters in the city and some of them shall be developed as vibrant community spaces.

As the City festival .FEST is being organized by BDA, there has been very intensive plans for citizen outreach and community engagement initiatives planned by Both BMC & BDA.