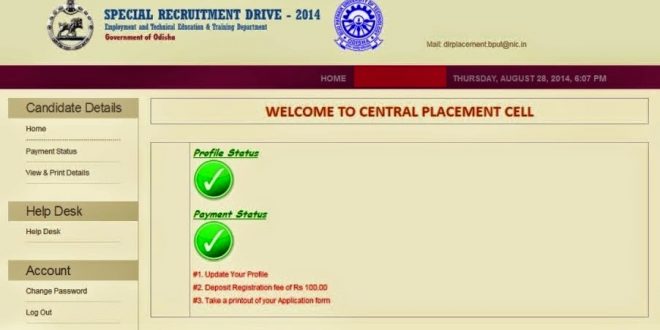 BHUBANESWAR: Even though the Odisha government collected around Rs 48 lakh from around 48,000 students last year by promising to facilitate placement of technical and professional graduates in private companies through Special Recruitment Drive (SRD), it is yet to start the process to organise the recruitment drive.

The government had decided to hold Special Recruitment Drive-2014 originally planned to be held from September 17 last year.

According to an RTI reply, the Biju Patnaik University of Technology (BPUT) recently said preparations for the drive are still on.

“In order to outsource a part of the programme, party selection process is going on,” it said.

The BPUT spent Rs 38,000 on the advertisement of the drive and paid Rs 25,000 honorarium each to six faculty members to contact companies interested in participating in the recruitment drive.

B Tech, M Tech, MCA, MBA and Pharmacy graduates from all universities and colleges in the state were to take part in the job fair proposed to be organised in collaboration with Biju Patnaik University of Technology (BPUT).

The state government had announced to short-list the registered students through an online test. However, no such test was conducted.

On August 12, 2014, a high-level committee led by the then technical education secretary, Chandra Sekhar Kumar, had decided to develop a website for the drive and seek technical support for the purpose from NIC.

However, the BPUT in its RTI reply said, “No such website was made in this regard.”

He threatened that the body would agitate if the BPUT doesn’t announce an inquiry into the corruption.

Sources said the government backed out to organise the special recruitment drive because it did not want to cut a sorry figure and create a situation where there are too many aspirants chasing too few jobs.

When Update Odisha tried to find out the status of the recruitment drive-2014, the linked website http://cpcdtet.nic.in/Nijukti.aspx in the BPUT website showed – “404 – File or directory not found.