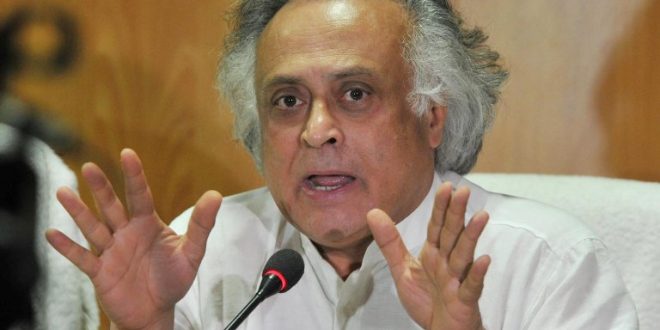 NEW DELHI/BHUBANESWAR: Slamming both BJP and BJP for having an unholy alliance to bail out each other, senior Congress leader and former Union minister Jairam Ramesh on Sunday demanded Supreme Court-monitored probe into the chit fund and mining scams in Odisha.

Holding a press conference at New Delhi in the presence of Odisha Congress chief Prasad Harichandan, Ramesh said the CBI inquiring into chit fund scam in Odisha had protected the Naveen Patnaik government at the behest of Narendra Modi government at the Centre.

His accusation came after Union Tribal Affairs Minister Jual Oram’s statement that centre is lenient against the state government over mining and chit fund scams.

“Prime Minister Narendra Modi’s assertions of ‘Zero tolerance against corruption’ and ‘Na Khaunga- Na Khane Doonga’ are but hollow slogans, which have repeatedly been contradicted by Modi himself in not initiating decisive actions against corruption and people accused of corruption,” said Ramesh in a statement issued to media.

He said Congress party has also steadfastly maintained that Odisha Chief Minister Naveen Patnaik is leading a massively corrupt regime involved in the blatant loot of precious resources of Odisha and its people.

“We now stand vindicated with shocking revelations, which prove that Prime Minister is not letting the CBI investigate into the charges of corruption against the Naveen Patnaik Government in the ‘Saradha’ and ‘Mining’ scams. In fact, we stand vindicated that BJP and BJD are in cahoots in looting the resources and people of Odisha,” he added.

This vindication comes shockingly and truly as evidence from none less than Prime Minister’s Cabinet colleague from Odisha and Union Minister for Tribal Affairs, Jual Oram.

Oram has left very little to speculation by making a categorical statement to the effect that, “The central government has let the state government off in many issues including chit fund and mining scams. Had it not been the case, the CBI would have finished them off already. They should thank the centre for it.”

Jual Oram’s clear-cut admission is confirmation of what Congress party has maintained for long, he added.

The BJD Government is involved in ‘Mining Scams’ worth thousands of crores and its Ministers, MPs and MLAs are neck-deep in the ‘Chit Fund’ Scam that defrauded ordinary people to the tune of Rs.2,984 crore.

He said Narendra Modi is blatantly misusing the CBI to protect Naveen Patnaik government, rather than letting it investigate and prosecute the guilty.

On the other hand, the BJD Government had been sitting pretty and doing a wishy-washy State Police probe into all the allegations of corruption against itself.

The statement made by Jual Oram belies any assertions on the part of CBI and its Boss – the Prime Minister and the BJP on the contrary, Ramesh said.

Admission of Jual Oram also provides sad evidence of the fact that Modi government is grossly misusing the CBI to implement a ‘carrot and stick policy’ to make smaller parties come around to fulfil its political agenda.

In light of the explosive revelations and the grave connotations thereof, Indian National Congress demands that the Prime Minister as the executive head of CBI breaks his silence and explains as to what is being done by the Captive Bureau of Investigation (CBI) at the demands made by its political masters i.e. PMO.