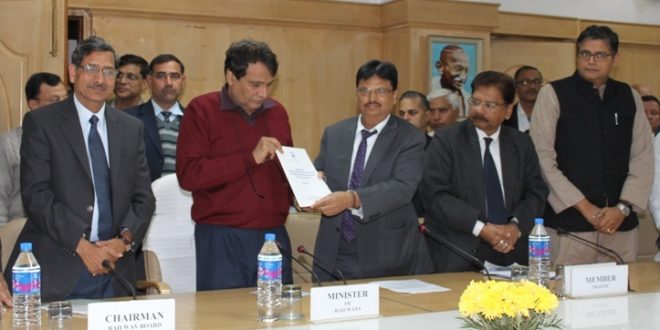 BHUBANESWAR: The house committee of Odisha assembly on railways on Wednesday presented a memorandum to Railway Minister Suresh Prabhu requesting him to grant Rs 5,000 crore in the ensuing rail budget 2016-17 for development of rail network in the state.

The Ministry of Railways is requested to give top priority to Odisha and allot Rs 5,000 crore towards ongoing railway projects, the sanction of new lines, Gauge Conversion, Doubling, Dedicated Industrial Corridor, surveys, improvement of passenger amenities with the introduction of new trains, extensions and increase in frequency, etc.

“We have submitted a memorandum to the Railway Minister requesting him to allocate Rs 5,000 crore in the coming railway budget. The memorandum has covered all aspects of the state in the railway sector,” said Pujari.

Sources said, while a demand of Rs 1,050 crore was made for ongoing rail projects in the state, Rs 2,270 crore and Rs 335 crore proposed for double line and electrification works respectively.

The committee has also demanded Rs 200 crore for setting up of special purpose vehicle (SPV) for rail projects for coal evacuation and umbrella SPV for general rail projects in the state.

The present rail infrastructure in the State is completely inadequate to handle the future growth of traffic. While the State contributes more than Rs.14000 Crores approximately to the revenues of Indian Railways, the railway route length spread across Odisha is little less than 2500 Kilometres with an average of 15.03 kilometres per 1000 square kilometres as against the national average of 19.00 Kms.

Hence, it is requested that Odisha should be paid due attention for allotment of projects and funds in the ensuing Railway Budget 2016-17so as to ensure not only the development of the state of Odisha but also the country as a whole.

Odisha is progressively emerging as the manufacturing hub of the country based on its available natural resources with the substantive addition of energy generation capacity. The State is in the steps of adding more than 100 Million Tons Per Annum (MTPA) capacity in steel making, 8 MTPA in alumina refining, 15 MTPA capacity in petrochemical refining, 50,000 MWs in power generation and 30 MTPA in cement manufacture.

Of the MoUs signed, more than 33 iron & steel projects have gone into commercial production with more than Rs30,000 Crores investment.

Further, the ports in Odisha like Paradeep and Dhamra have an ambitious plan for major expansion in near future. Other important ports like Astarang, Gopalpuretc. are in various stages of commissioning. There is a proposal for the establishment of Petro Chemicals Processing Industry (PCPIR) at Paradeep. All these infrastructures require appropriate rail connectivity.

In the next five years, it is expected that additional rail borne traffic generation in Odisha will be more than a staggering 450 MTPA.            The role of railways as a low-cost, high-volume carrier of bulk cargo over long distances is the vital cog in the entire wheel of transportation, logistics and supply chain management in addition to providing succour to the travelling public. Since independence, only five B.G. rail links namely Cuttack-Paradeep (83 Kms.), Talcher-Sambalpur (174 Kms.), Koraput-Rayagada (164 Kms.), Daitari-Banspani (155 Kms)andLanjigarh Road-Junagarh(56 Kms.) have been commissioned.

SETTING UP OF SPVs FOR DEVELOPMENT OF RAIL INFRASTRUCTURE IN ODISHA

Earlier, when Ministry of Railway was facing problem in arranging equity for its two SPV projects i.e. Angul – Sukinda and Haridaspur – ParadeepRailway Projects, Odisha government came forward to be an equity partner in both these projects. So far Odisha government along with its undertaking OdishaMinningCorporation (OMC) have contributed Rs 190.80 Crore to Anugul-Sukinda Rail Company and Rs 174.70 Crore to Haridaspur – Paradeep Rail Company respectively as equity. All support and assistance are rendered to Railway for execution of the projects in the state and progress of the projects, including land acquisition and other allied issues,areperiodically  monitored by officials at the highest level.

The total length of the Project 289 Km. Sanctioned during 1994-95. However, due to the paucity of fund, Railway Board has made budget provision for only 112 Km. stretch from Khurda to Dasapalla.Odisha Government gave a proposal to bear 50% cost of construction and bear total land cost between the stretch 112-289 Km. Accordingly, a MoU for this purpose was signed between Ministry of Railway and Odisha Government on 20.07.2015.The approximate construction cost of the project between 112-289 Km. is around Rs. 2000 crore and total land cost for the stretch will be approximately Rs.350 crore. Hence, Odisha Government’s share for this project will be Rs.1350 crore approximately.The project should be constructed in a time bound manner within six years as per MoU, and adequate budget provision should be made for this purpose.

East Coast Railway (ECoR) that was made functional from 1st April 2003 with three divisions namely, Khurda Road, Sambalpur and Waltair, has the lowest operating cost amongst the zonal railways.

Ministry of Railways is requested to either extend the jurisdiction of Sambalpur division to include (a) Jharsuguda-Barsuan-Kiriburu (b) Rourkela-Nuagaon (c) Jharsuguda-Himgiri or to create a new division with headquarters at Rourkela/Jharsuguda with jurisdiction as mentioned above under the East Coast Railway. Likewise, the jurisdiction of East Coast Railway may be extended to include Bansapani-Padapahar, Rupsa-Bangriposi and Bhadrak-Laxmannath road sections and a new Railway Division should be set up with headquarters at Jajpur-Keonjhar Road.

Besides Ministry of Railways is requested to create another Railway division at Rayagada under the jurisdiction of East Coast Railway Zone comprising the following lines: Nuapada-Gunupur with proposed extension to Therubali/Rayagada, Rayagada-Titilagarh-Raipur, Koraput-Rayagada, Koraput-Jeypore-Jagdalpur, Lanjigarh Road-Junagarh and proposed Railway Lines in Malkangiri, KoraputandNawarangpur District.

There is a large part of Odisha covering the backwards region of undivided Kalahandi–Bolangir–Koraput (KBK) districts that have remained untouched by the projects of railways. The Indian Railways need to partner the vision of the State Government and make a concerted effort towards connecting these regions to the national network. This would foster the development of the region and also act as a bulwark to counter the existing menace of left wing extremism.

As has been proposed earlier, a new railway line from Bhadrachalam Road (Andhra Pradesh)–Malkangiri–Jeypore– Junagarh–Lanjigarh Road–Talcher–Bimlagarh assumes topmost priority. Survey work of this line should be completed expeditiously.  Similarly, the survey work of Sambalpur-Berhampur new railway line should be completed and sanction accorded. Both these railway lines will go a long way in reducing regional disparities and ensure inclusive growth by operating as East–West and North–South logistic backbones for the entire State.

Immediate commencement of work on sections like Jeypore– Malkangiri, Jeypore – Nabrangpur and Bargarh/Bolangir–NaupadaviaPadmapur where surveys have been completed will create new & alternative corridors for movement of thermal coal and other minerals.

It is very important that the Ludhiana–DankuniEastern Dedicated Freight Corridor should be extended from Dankuni to Brahmapurvia.Haridaspur so that upcoming ports at Kirtania, Dhamra, Chudamani, Astarang and Gopalpur along with the major port of Paradeep are linked to the vast northern and central hinterlands of India. All of these lines will need to be established within the next four years so as to enable the eastern coast to take a meaningful advantage in the country’s overall maritime trade.

Time is ripe for Indian Railways to develop mega multi-modal logistics parks near the important industrial clusters like Kalinganagar, Angul, Jharsuguda, Rourkela and Choudwar. Odisha government requests Railway Ministry to allot Rs.10 Crores each in 2015-16 budget provision for this purpose.

Keeping in view, the rapid urbanisation and increasing demand for commuter services, Mainline Electric Multiple Units (MEMU) types suburban trains along with appropriate commuter facilities to be created in the following suburban sections: