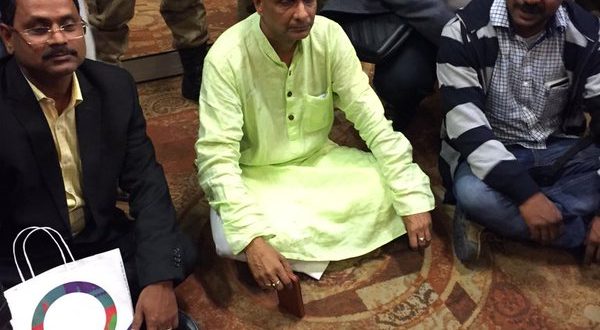 BHUBANESWAR: Protesting against the VVIP culture, Odisha’s Biju Janata Dal MP Tathagata Satpathy on Friday night resorted to a sit-in dharna in front of the gate of Indira Gandhi International (IGI) airport in New Delhi against the alleged preferential treatment to a minister of Madhya Pradesh and two judges by Air India.

The incident took place in the night when a Bhubaneswar-bound Air India flight was cancelled and diverted to Bhopal to take a BJP minister and two judges.

Protesting the move, Satpathy blocked the entry of the passengers at the airport protesting the alleged privilege extended to a BJP minister from Bhopal and two judges.

Senior television journalist Rajdeep Sardesai, who was on his way from the national capital to Bhubaneswar to attend OTV’s foresight programme, was to board the Air India flight along with Tathagata Satpathy and others.

Sardesai tweeted the sequence of events that unfolded till late in the night and even posted the byte of the parliamentarian on the microblogging site.

The incident has also gone viral on social media as people criticised the Air India.

Tathagata Satpathy said that Air India kept on delaying their flight as the national carrier had posted the crew from their flight to the one in which Madhya Pradesh Minister Sartaj Singh was travelling.

According to sources, an Air India flight to Bhopal was cancelled as the pilots refused to fly after their duty hours were over.

Suddenly, an announcement came that Air India flight to Bhubaneswar was cancelled. However, the flight crew were reportedly recalled and asked to fly on the Bhopal flight giving rise to resentment among the travellers.

“One BJP min of state from MP and two judges on Bhopal flight. Is that reason enough for AI MD to ask pilots to move from one Flt to other?” Rajdeep tweeted post midnight.

The chaos at the airport continued till 2 am and finally the Bhubaneswar flight took off for its destination. The flight landed here at 4.30 am this morning.

One BJP min of state from MP and two judges on Bhopal flight. Is that reason enough for AI MD to ask pilots to move from one Flt to other?

“This is a very sad state of affairs with the way Air India is behaving. They first announced that they have cancelled the Bhopal flight. Just because there were some VIPs there, one BJP minister of the state and two judges… Now they are saying that Bhopal will go, and Bhubaneswar will not go. It is very sad indeed,” BJD MP Tathagata Satapathy told Rajdeep in a video who shared it on Twitter.

The journo also raised the issue during his speech at the OTV’s programme on Saturday.

Suprabhatam! Reached Bhubaneshwar at 4.30 am, air India hostess says welcome to raja bhoj airport in Bhopal! An AI story for the ages!