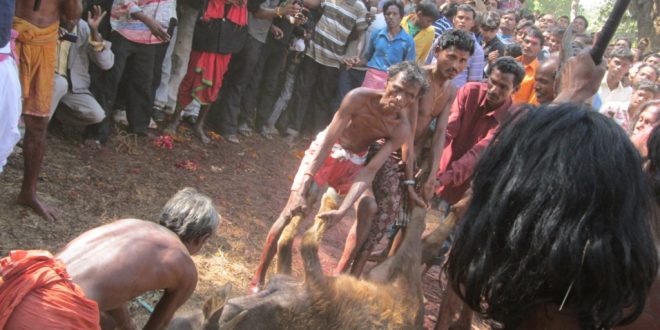 BOLANGIR: Taking a U-turn over the age-old practice of sacrificing animals, the Chief Priest of Sulia Yatra Sunday requested district administration to intervene and take steps to stop animals sacrifice in the name of ritual.

Sulia Yatra chief priest Biranchi Kunwara requested district administration to take steps and create awareness to curb the tradition of animal sacrifice. The tribal group on January 3 had announced to observe the festival according to ritual on the first Tuesday of the bright fortnight (Sukla Paksa) in the Hindu calendar month of Pousha i. e on January 12.

“I have submitted a request letter seeking the intervention of district administration to create awareness and stop the age old tradition of sacrificing animals during the sulia yatra,” said chief priest Biranch Kunwara.

Social activists have welcomed the step taken by the chief priest.

“It is a welcome step. A chief priest can motivate tribal to stop the tradition and mark it as the festival,” said a social activist.

Notably, a bench of Chief Justice H L Dattu and Justice Amitava Roy on September last year refused fused to interfere with religious practices and said the judiciary could not stop centuries-old traditions of sacrificing animals by different communities.

“I have discussed with Superin

tendent of Police, Bolangir to launch an an awareness campaign to curb the tradition,” said Bolangir district collector M Muthukumar.

With the refusal of Supreme Court to interfere with religious practices carrying centuries-old traditions of sacrificing animals by different communities, tribal people in Western Odisha  today announced to observe the annual “Sulia Yatra” at Khairaguda in Bolangir district.

Sulia Yatra is observed by the tribal people of Bolangir and adjoining districts on the first Tuesday of the bright fortnight (Sukla Paksa) in the Hindu calendar month of Pousha.

A large number of animals including buffaloes, goats, sheep and chickens, pigeons, ducks and swans are slaughtered at Khairaguda of Deogaon in Bolangir district while administration poses a mute spectator. Thousands of animals and birds are sacrificed by tribals every year for the sake of upholding their ‘religious’ values.