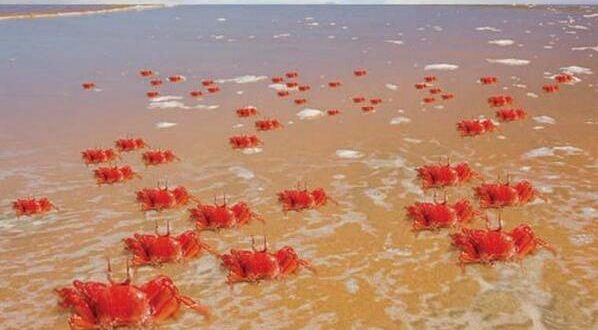 PURI: The appearance of lakhs of Red Ghost crabs, which are generally found at the Talsari beach in Baleswar district, along the coastline in Puri district and Chilika in Ganjam district has generated curiosity among the environmentalists as well as tourists in Odisha.

However, the Forest Department maintained that there is nothing unusual about these marine species.

The forest officials said that the Red Ghost crabs are usually found in Muhana areas like Ramachandi Muhana, Debi Muhana and Keluni Muhana in Puri district with the Debi Muhana being their most favoured destination.

“There is nothing unusual about the appearance of these species in these areas this year,” said Chittaranjan Kumar Mishra, DFO of Puri Wildlife Division.

He said the Forest Department had taken steps for the protection of these crabs, the scientific name of which is Ocypode Macrocera, originating in the Christmas Island in Australia.

Notably, the Forest Department has taken steps to save the Red Ghost Crab species and prepared an action plan for inclusion of this rare species in Schedule IV of the Wild Life Protection Act, 1972 for its conservation.

These large crabs are active during the day but prefer to stay in the shade and can die in the moisture-robbing heat of direct sunlight. They scavenge on fallen leaves, seedlings, fruits and flowers, recycling nutrients and helping determine the spread and composition of native flora.

Most of the year, these crabs are solitary dwellers of the burrows they dig throughout the forest. During the dry season, they retreat into these shelters to retain body humidity and essentially remain there for two to three months.

At the outset of the rainy season, they begin a mass migration to their seaside breeding grounds, moving in colourful waves that wash over all obstacles — roads and cliffs. They arrive at the coast and mate at such a time that the females can produce eggs and develop them in burrows for a dozen or so days before releasing them into the sea precisely when the high tide turns between the last quarter and new moon.

Meanwhile, the Odisha government has decided to promote the Talsari beach to attract more tourists.

The state government has already identified 700 acres of land for Tourism Infrastructure to be developed in the Public-Private-Partnership (PPP) mode, said sources.

The unspoilt Talsari beach needs proper planning and publicity to come up to that level, said an expert in Travels and Tourism Industry.

Odisha’s Talsari is a pristine beach which attracts much less crowd than Digha in West Bengal has been luring over a lakh foreign tourists and 25 lakh domestic tourists.

Talsari is just 6 km from the City Centre of Digha, and one can feel the difference between both the beaches.

While Digha and New Digha offers a large number of hotels, resorts and restaurants for the tourists, these facilities are lacking in Talsari, which is more attractive and has huge potential in making it a National Tourist Destination.