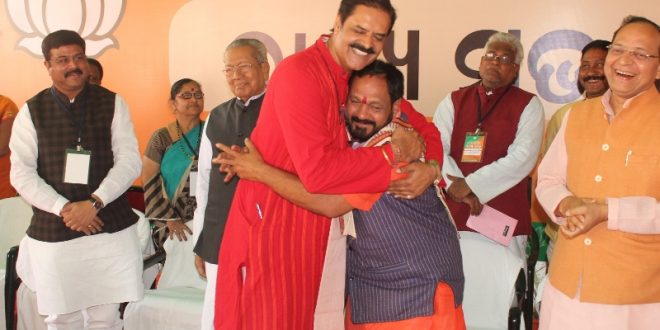 BJP has no faction, says Basant Panda in an exclusive interview

UpdateOdisha interacted with the new Odisha BJP president Basant Panda about his vision to strengthen the party and fight against the opposition parties in the coming days, especially in the Panchayat elections and what would be his mantra to keep the flock together.

Here are the excerpts:

What would be your first priority after assuming charge of the president?

My priority would be to strengthen the party by uniting the workers in 50,000 villages across the state. I will assign the active and eligible workers of the party to work for strengthening the organisation from the grassroots level.

They will be instructed to continue agitation against the anti-people Naveen Patnaik government. Besides, the welfare programmes of Narendra Modi government would be highlighted to gain the confidence of people.

What are the factors that led you to become Odisha BJP president?

I can’t say about the factors that helped me to become president. But, I am working in the party since last 25 years as general secretary of the district to district president, general secretary of state, vice-president and legislature party leader. Whatever works have been assigned to me, I have always tried to perform with true letter and spirit. I think that impressed the leaders and workers and as a result, I am here.

Does your affiliation with RSS play a role to adorn the coveted post?

BJP is a political party and separates to any religious and cultural organisations. The organisations have no role to play in politics. I became president with the help of all workers and leaders of the party.

Do you think that you can keep the flock together in the faction-ridden party?

There is no faction within the party. There is also no difference of opinion. We take a decision regarding issues by taking the leaders into confidence.

I have good relation with all senior party leaders and will take the party ahead in the coming days with their support and blessings. I am here as Arjun, the senior leaders Krushna and they will take me in the right direction.

How do you see the Naveen Patnaik government?

The Naveen Patnaik government is an anti-people government. We will fight against the government by raising several issues including the scarcity of doctors, teachers, lecturers, drinking water, and electricity connection. Besides, farmers’ issues will be raised in the coming days.

At a time you are raising your voice against Naveen Patnaik, the central ministers are showering praise on him. What would you say?

In a federal system, the centre and state are two sides of a coin, and they should respect each other in a democratic system. When the central ministers are coming to Odisha, they are stating something about the activities of government. But, at the same time, they are also warning the government over its failure and wrong doings.

Would you buy the statement of Jual Oram over centre’s role in ongoing chit fund probe?

The centre has no control over the CBI inquiry into the chit fund scam. It is managed by Supreme Court. Mining scam is also under consideration of Supreme Court.

So, you want to say that the perception of Jual Oram is wrong?

No, I can’t say under what circumstances and what context he made the statement. BJP is not constituted to help anyone involved in corruption and scam. It has been constituted for the all-round development of the country and state.

The Panchayati Raj election will be fought under your leadership. How do you prepare your party cadre?

First of all, I will prepare strategies to strengthen the party with the help of party leaders. We will reach out to people. We are certain that the party will put a good show in the next election.