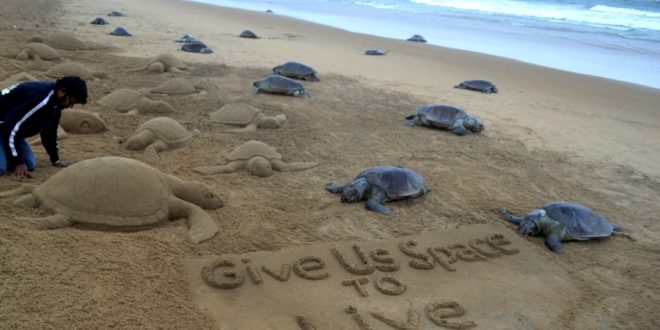 Besides, a bottlenose dolphin has been found dead at Puri beach. The dead turtles have washed ashore.

It is alleged that the death of the endangered species occurred due to illegal fishing.

Renowned sand artist Sudarsan Pattnaik has created a sand sculpture of turtles with message “Give us space to live” at Puri beach.

“Today I found hundreds of dead turtles at Puri beach. I felt sad to see these turtles and never seen such a huge number of dead turtles at Puri beach. So, I have created some live size turtles, and I want to appeal the Government through my sand sculpture to find out the cause of death of turtles, and I also appeal to the people to protect and conserve these sea animals,” said Sudarsan.

The Odisha coast is one of the main mass nesting centres in the world map for the Olive Ridley turtle since time immemorial. Three sites in the coastal zone of Odisha are famous in the world for mass nesting of turtles. They are Gahiramatha, Devi Mouth and Rushikulya Mouth.

So far the Padma Shri awarded sand artist Sudarsan Pattnaik has participated in more than 50 International sand art championships and festivals around the world and won many prizes for our country. He always tries to spread social awareness messages through his sand sculpture.