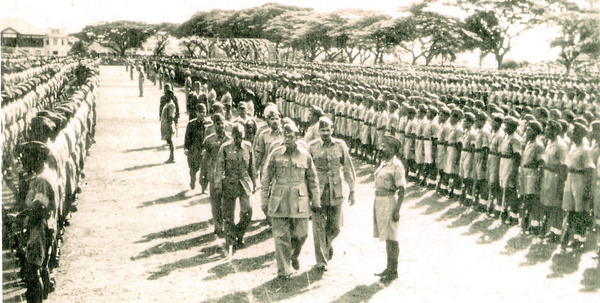 Album showcasing Odias in INA to be displayed at Netaji museum

CUTTACK: Netaji Birthplace Museum authorities in Cuttack have compiled the names and addresses of 337 Oriyas, who had joined the Indian National Army (INA) raised by legendary leader Netaji Subhas Chandra Bose to fight against the British regime during the pre-independence period.

A 30-page album prepared by the museum authorities bears all the salient information on the Oriya soldiers of the INA.

This album will be made available at the museum’s library January 23 on the occasion of Netaji’s birth anniversary.

“A majority of Oriyas, who had joined the INA, or Azad Hind Fauj, have passed away. We have prepared the album after contacting those alive and the family members of the deceased ones to collect information,” said museum curator Jyotiprakash Das.

Many rare photographs of the INA, the provisional government and national bank established by Netaji have found a place on the album, he added.

Some of the living Oriya INA soldiers depicted in the album include Sheikh Ramzan Qureshi (104), of Mandosil under Paikamal block in Bargarh district, who had suffered bullet injuries during a battle with British Indian troops.

Sources said the centenarian now survives on a paltry old-age pension of Rs 300 provided by the state government.

Officials of the Indonesian embassy and Netaji’s granddaughter Jayanti Bose had felicitated Qureshi at a programme in Bhubaneswar a few days ago.

Similarly, Laxmi Indira Panda, of Koraput, had joined the women’s unit of Azad Hind Fauj. Felicitated a few years ago by then President Pratibha Patil, she worked as a housemaid to earn a livelihood.

Former INA soldier Khali Pradhan (95), of Ranapur in Nayagarh district, has been bedridden for the last three years.

Sources said he had worked as a labourer to earn a livelihood after the defeat of INA.

Several others, who are alive, are also living in the precarious conditions, sources added.