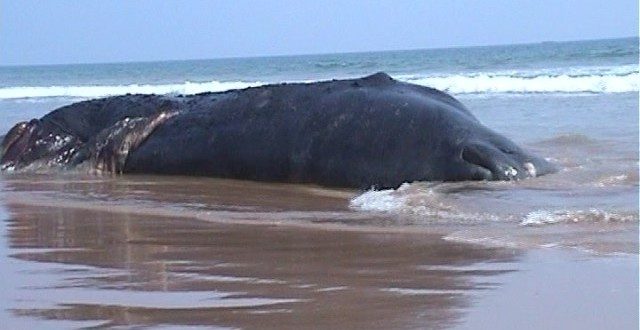 PURI: Days after two dead whales washed ashore near the coast in Odisha’s Ganjam and Kendrapara districts, another carcass of a whale, was found from the coast near Motagaon village in Brahmagiri area of Puri district on Tuesday.

Forest official said that the cause of the death would be ascertained only after post-mortem.

Earlier this month, a carcass of a whale measuring 33 feet in length with a diameter of 12 feet was sighted at Podampetta coast in Ganjam district on February 3. The forest personnel of Rajnagar Forest Range in Kendrapada district had stumbled upon a 66- feet long whale washed ashore to the coast on February 5.

A few days before this, a giant dead whale washed ashore at the Juhu beach in Mumbai.

Last month, carcasses of more than 60 whales were sighted along the coast of Tamil Nadu.