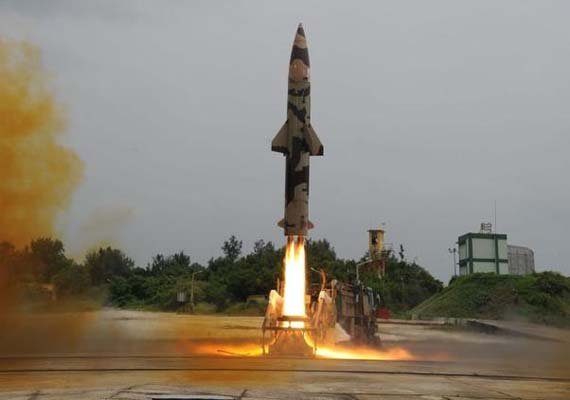 The missile test was carried out from a mobile launcher from launch complex-3 of the Integrated Test Range (ITR) from Chandipur in Balasore district at about 10.00 hours, defence officials said.

With a strike range of 350km, the surface-to-surface Prithvi-II is capable of carrying 500 kg to 1,000 kg of warheads and is thrust by liquid propulsion twin engines.

It uses advanced inertial guidance system with manoeuvring trajectory to hit its target.

Data of the missile trial conducted by the specially formed Strategic Force Command (SFC) were being analysed, officials said.

The Strategic Forces Command (SFC) of the Indian Army conducted the test as part of a regular training exercise.

With a strike range of 350 km, Prithvi-II is thrust by liquid propulsion twin engines. It uses advanced inertial guidance system with manoeuvring trajectory to hit its target.

Notably, Prithvi is India’s first indigenously built ballistic missile. It is one of the five missiles being developed under the country’s Integrated Guided Missile Development Programme.

The battlefield missile, with a flight duration of 483 seconds and a peak altitude of 43.5 km, can carry a 500-kg warhead, sources added.

The source said the missile was randomly chosen from the production stock, and the entire launch activities were carried out by the SFC and monitored by the scientists of Defence Research and Development Organisation (DRDO) as part of a training exercise.

Inducted into India’s armed forces in 2003, Prithvi-II — the first missile to be developed by DRDO under the prestigious IGMDP (Integrated Guided Missile Development Program) — is now a proven technology, they said.

Such training launches indicate India’s operational readiness to meet any eventuality and establish the reliability of this deterrent component of strategic arsenal, defence officials said.

The missile was inducted into India’s armed forces in 2003. The last user trial of the missile was successfully conducted on November 26 last year from the same test range in Odisha.