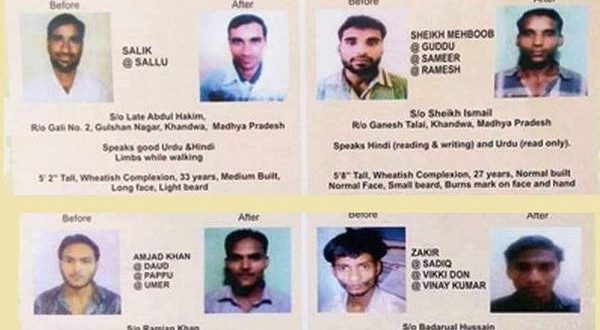 Naveen helps terrorists to get fake identity in Odisha: DGP

BHUBANESWAR: The arrested five terrorists having a link with banned Students’ Islamic Movement of India (SIMI) had managed to get fake identity proof and pan card in Odisha, said DGP KB Singh on Wednesday.

While they have managed to get fake bank accounts, they were also trying to get passports by furnishing fake documents in the state.

DGP said one insurance agent named Naveen Sahu of Rourkela had helped the terrorists to get fake identity proof and pan card in the state.

The terrorists were arrested from a house in the steel city of Rourkela in a joint operation by Odisha police, Telangana police and Intelligence Bureau.

Singh said four terrorists, out of five, have carried a bounty of Rs 10 lakh each by NIA. All the four hail from Madhya Pradesh and are also wanted by NIA.

They were also planning to rob a bank in Chhattisgarh.

They were amongst the most-wanted terrorists, and the NIA had announced Rs 10 lakh reward on each of their heads.

Security forces also seized 5 guns and ammunition from their possession, added sources. Meanwhile, no civilian casualties were reported in the 3-hour-long operation in a residential area.

Meanwhile, police sources also said that they had been kept at a secret location for interrogation.

Following the arrest of the five terrorists, Police DG Singh met CM Naveen Patnaik at the Secretariat and the Home Secretary to apprise them of the situation.

Singh also informed that the services of the Tactical Unit were used successfully in the operation.

This is the first operation where the Tactical Unit was pressed into service.