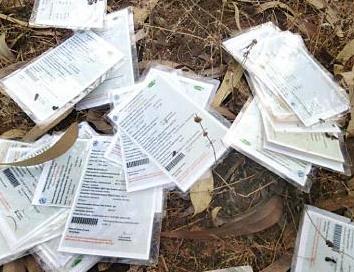 BHUBANESWAR: The National Human Rights Commission (NHRC) has issued notice to Odisha government over dumping of more than 700 ration cards provided under National Food Security Act (NFSA) near the railway tracks of Puri district in January this year.

Acting on a complaint of Akhand, a rights activist of Civil Society Forum on Human Rights (CSFHR), the commission has directed to the secretary of Food Supply and Consumer Affairs department to submit its report in the matter within four weeks.

The petitioner alleged that the cards of Ganjam district were found dumped near the railway tracks at Anlajodi in Kanas block of Puri district on January 12. Some villagers spotted the ration cards some meters away from the railway tracks.

“It is suspected that somebody who came by train from Ganjam had dumped the cards fearing punitive action by the government. The state government had said that action would be taken against ineligible NFSA beneficiaries from January 16”, said the petitioner.

The dumped ration cards shows that they belong to Sanakodanda,majhigada, Bada Kondada, Gurnaribada, Chitapalli and Sana Padara Panchayat of Bhanjanagar Block,. All the cards were apparently received by the beneficiaries and were laminated.

Akhand prayed before the commission for a probe to the incident and legal action against the culprits or erring officials if anyone involved in the matter.