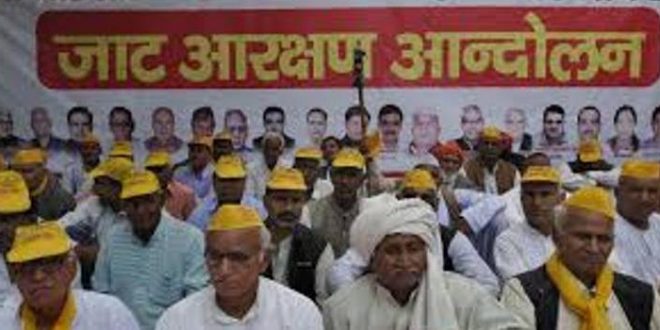 NEW DELHI: As both the State and Union Government have been busy in finding the modalities for reservation of Jats in the job and educational sectors, the agitators have been continuing with their protests across Haryana.

Road traffic on various national and state highways remained suspended for the third consecutive day Monday. Sporadic incidents have been reported in Rohtak and Sonepat district. However, normalcy was restored in most parts of the violence-hit state.

While curfew was lifted from cities of Kaithal, Kalayat, Hisar and Hansi, the police announced one-hour curfew relaxation in Rohtak.

Normalcy limps back for a while in the morning hours after the Center’s announcement for Jat reservation bill to be tabled in the forthcoming assembly session. The Centre yesterday evening announced setting up a panel under the leadership of the Urban Development and Parliamentary Affairs Minister M Venkaiah Naidu to look into the quota demand for the Jat community in government jobs.

Meanwhile, Union government special committee today held its first meeting under the chairmanship of M Venkaiah Naidu. “We require some time to finalise modalities after consulting all the stakeholders”, said Naidu after the meeting.  At first, we will analyse all previous negotiations that held with the Jat community leaders, he said.

Soon after the meeting, Minister of State for Agriculture, Sanjeev Baliyan in New Delhi, All India Jat Aarakshan SangharshSamiti (AIJASS) in a press note appealed the agitators to end the stir.

AIJASS National President Yashpal Malik said that a delegation of Jat leaders today held a deliberation with the minister, and they got an assurance from the government.

However, Government’s assurance to bring a bill for granting OBC status to Jats didn’t pacify the agitating Jats. They have been demanding a written assurance from the government on the reservation.

Water supply from Munak canal in Haryana to Delhi has been restored after Army and Rapid Action Force cleared up protesters in the morning. In a related development, hearing a plea filed by the Delhi Government, the Supreme Court rapped the AAP government for not solving the problem at the government to government level.

Rail and road services in the northern states have badly affected with around 736 trains cancelled and 105 diverted. Railway properties were severely damaged as the total losses rounded off is about Rs.200 crore.

About 12 stations set on fire till now, leaving many trains and thousands of passengers stranded midway, tweeted Railway Minister Suresh Prabhu. More than 10 lakh passengers have been affected due to the ongoing Jat agitation in Haryana; railway officials said Sunday.

Industrial body Assocham estimated the total economic losses due to the ongoing Jat agitation in between Rs 18,000-Rs 20,000 crore.

“Since Haryana shares borders with   Delhi, Punjab, Rajasthan and Uttar Pradesh and is the transit route for a number of national highways and trunk railway lines, the collateral damage to the economic activities to other states in terms of loss of production, transport and movement of people would add a few thousand crores more to the overall loss to the national economy”, it said in a press communication.

It further mentioned that, ‘while the state government would assess the loss of damage to public property like burning of buses, private vehicles, railways stations, police stations, malls and hotels, the trade, industry and other businesses have come to almost complete halt in most of the districts, barring parts of Gurgaon, Rewari and other few areas on the Delhi-Jaipur National Highway.

Constituting nearly 29 per cent of Haryana’s total population, the Jats are traditionally an agrarian caste and command good influence both economically and politically as well. In 1991, when the Mandal Commission recommendations were implemented, Jats had demanded to exclude their caste from OBC list, however, in 1997 Jats in Haryana, Uttar Pradesh and Madhya Pradesh demanded them to be included in the central OBC list. But  National Commission for Backward Classes later rejected their demand.

In 2004, Congress party won Haryana Assembly election promising Jats a quota.  But Chief Minister Bhupinder Singh Hooda failed to fulfil that poll promise. Ahead of Assembly election in 2014, HoodaGovernment included Jats along with four other castes in Specially Backward Class (SBC) category with 10 percent quota.However, in July 2015, the Punjab and Haryana High Court rejected it.