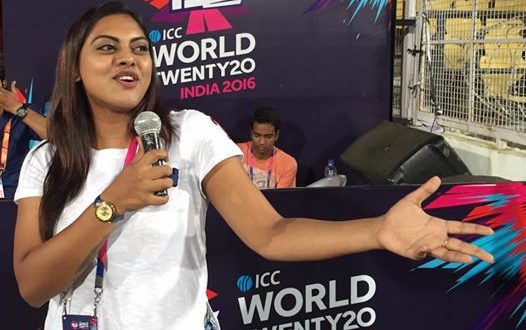 The 26-year-old Sunita will anchor in the T20 Match with her powerful and energetic voice. She has anchored several major sporting events like Indian Premier League (IPL), Champions Trophy Hockey and Hockey India League.

“I cannot explain in words what I feel when my voice echoes all around the stadium. It is a great honor to be selected by the ICC and to anchor an international cricket tournament like T20 world cup,” Sunita Garbadu told the Times of India from Nagpur.

She has already anchored five qualifying matches of the tournament in the stadium.

“Anchoring an international cricket championship is exciting, but it is equally challenging. You have to be on your toes all the time, keeping an eye on the stadium, on players, on the audience and constantly cheering them. It requires lots of energy, style, proper accent and of course knowledge of the game,” she said.

“Before each game, we are given a script which we follow apart from being totally spontaneous on the progress of the game every second,” she added.

Sunita, who has completed her graduation from BJB Autonomous College, pursued a course on becoming an air hostess. Besides being a popular anchor, she is also a model and worked in several TV serials and a couple of Odia films.