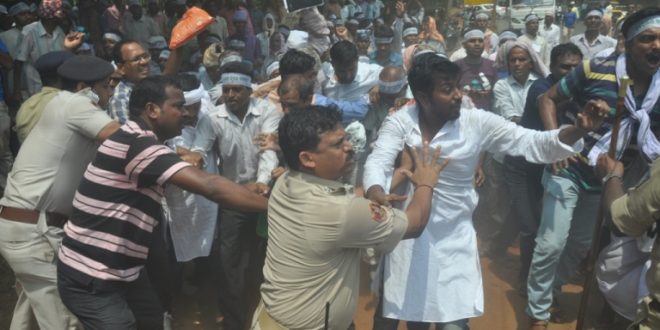 BHUBANESWAR: Demanding price, prestige and pension, thousands of farmers under the banner of Navanirman Krushak Sangathan (NKS) on Tuesday entered into a scuffle with the police personnel here while they were trying to march towards Odisha assembly in session.

Intensifying their agitation, the farmers beginning a civil disobedience movement took out a massive rally from Master Canteen Square here towards the assembly. However, they were detained by police near Idcol auditorium leading to a scuffle.

“We would continue our agitation until the state government accepts our demands. The government must pay heed to the plights of farmers,” said Akshaya Kumar, convenor of NKS.

Senior journalist and NKS adviser Rabi Das said the farmers had gathered here pressing their demand for social security and right price for their produce.

BJD spokesperson Amar Prasad Satapathy said the government is concerned to their demands and is taking necessary steps accordingly.

Notably, some ruling party leaders had met the agitating farmers on Monday and assured them of considering their demand.

Bhubaneswar DCP Satyabrat Bhoi said the police had made a preventive arrest of 800 persons.