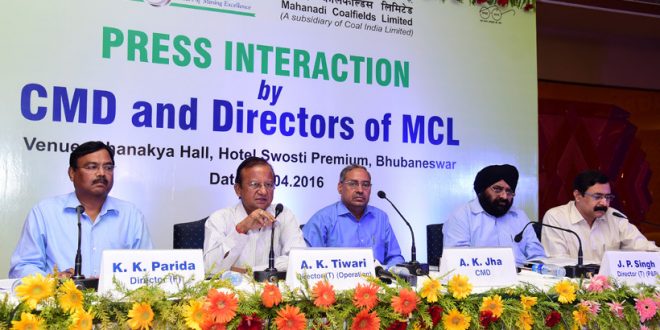 Jha also mentioned that all the power plants have more than 28 days of coal stock available with them, and there was no complain of raw material shortage.

The MCL CMD informed that a provisional of Rs 9974.49 crore would go to the exchequer that includes Rs 2585 crore to Odisha Government and Rs 7388 crore to union government following the production growth.

“All developed countries have commercial energy, and they are still exploiting the resources. We are a developing country, and we have sufficient coal energy, more than 300 Billion Tonnes of them, that will last for more than 100 years,” said the MCL CMD.

As MCL has set a target to achieve 250 mt by 2020, which is a part of CIL’s one billion tonne target, he said the company is going on a big way with the installation of infrastructure including the state of the art machinery and better transportation facilities to achieve the target.

MCL with its rail division MCRL and the state government, they are focused on improving their rail infrastructure by 2020. They have laid the plan to complete railway facilities between Jharsuguda-Barapli by June 2016, and Barapali-Sardege by March 2017.

When asked about the long-pending plan to build a medical college, Jha said, “We have already started the construction of Mahanadi Institute of Medical Science at Talcher and is in full swing. It will take two and a half year from today to complete. We may take admission from session 2019-20.”