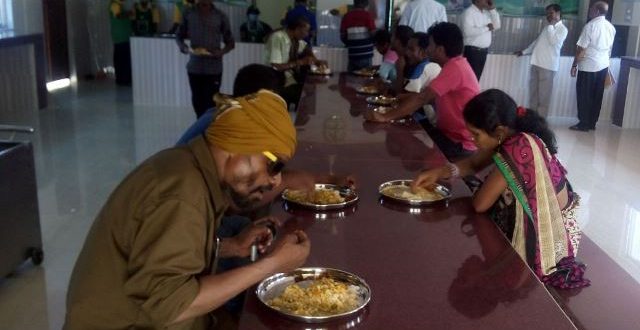 TALCHER: As part of the Odisha government’s initiative to open 100 Aahaar centres across the state, Rural Development Minister Badrinarayan Patra has opened two subsidised meal centres in Talcher on Friday.

The centre in Talcher Sub-Divisional Hospital can offer food to more than 200 people a day, whereas the centre at Talcher Bus Stand will have the capacity to feed as many as 500 people per day.

The Aahaar scheme, which was first launched on April 1, 2015, in five municipal corporations-Bhubaneswar, Cuttack, Sambalpur, Berhampur and Rourkela, has now been extended to every nook-and-corner of the state with the scheme gaining enormous popularity in each passing day, said the Minister.

The state government has always given emphasis to the benefit of the poor and extension of this programme is one of the best examples of that, said Patra, while addressing the gathering at Talcher Bus Stand.

Aahaar centres will be serving the hot cooked vegetarian meals comprising rice and dalma between the prime time of 11 am and 3 pm at the specified locations in Talcher at just Rs 5 to around 700 urban poor on all days, except the Sundays, informed local MLA Braja Kishore Pradhan.

The urban poor, who struggle to afford a Rs 30/40 meal while been into a town, would be the actual beneficiary of this scheme, empathised Pradhan while praising Chief Minister Naveen Patnaik’s effort of dedicating 100 new Aahaar centres across the state under the much-clapped scheme.

Over 60,000 people will be served lunch in these centres throughout the state.

Meanwhile, Angul Collector Anil Kumar Samal noted that food and drinking water to be served in these centres.

Offering foods to the poorest of the poor during festivals/rituals has remained a tradition with the people of the state and taking a cue from that the state government has extended this novel scheme to every part of the state, Pallahara MLA and president of Angul District Planning Board Mahesh Sahu said.

He also urged the people and industries of Talcher to contribute open-handedly to the noble cause as much as possible and take it to a step ahead regarding delivery of meals, centres and others.

Meanwhile, Angul MLA Rajanikant Singh suggested for another Aahaar centre near Talcher Sub-collector office, the busiest junction in the town.

Poor people from different parts of the sub-division, who daily come to Talcher town for the treatment of their relations and other purposes, will be mainly benefited from this extended initiative.