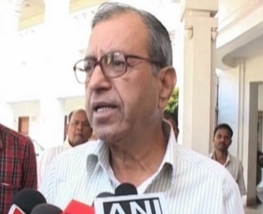 Prof. G Hargopal has written a letter to Odisha Chief Minister Naveen Patnaik regarding hunger strike by under trial prisoners demanding a speedy trial of their cases in jails of Odisha.

Hargopal is one of the Maoists chosen mediators who negotiated with the Odisha government for the release of R Vineel Krishna, the then Malkangiri district collector and junior engineer Pabitra Majhi, who were abducted by the ultras in February 2011.

Pl recall our meetings at the time of Malkangiri episode where we intervened and negotiated on a request from Odisha Govt and Maoist party. You would agree that the issue could be negotiated without any loss of human life. I am sure you would also appreciate civil societal intervention helps in conflict situations.

Now I learn from the press that the prisoners are on fast in Odisha jails almost for more than two weeks with certain demands. It becomes the moral responsibility of the State to respond. I may recall that at the time of Malkangiri negotiations the Odisha Govt promised that a maximum number of tribals who are detained for years would be given relief after proper review. It was agreed, and a committee was constituted with Shri Radha Mohan and others to review the situation. I am sorry that the meetings of this committee were never convened.

Now I appeal to you that the demands of the prisoners particularly political prisoners are addressed with a sense of urgency. In any democratic society, persons should not be punished for their political beliefs. One should not be detained for decades without any trial. The precious life is lost. A civilised govt is one which deals with dissent including radical dissent in utmost democratic manner. The Govt may not endorse their views, but the strength of democracy lies in dealing with dissenters in a democratic manner.

Kondapally Sitarammaiah the founder of Peoples War now the Maoist party was released from the prison on an appeal of civil liberties committee particularly K. G. Kannabiran by NTR govt on the grounds of his failing health. Several leaders are released by the Courts when the prosecution failed to establish the guilt. In such cases, entire detention for years become grossly unjust.

I personally take the liberty of a mediator and urge you to intervene and respond to the demands which will raise the prestige of the Govt and deepen the democratic credentials of governance. Releasing tribals and those fighting for their rights restores the confidence in the system and contribute to the reduction of violence from both the sides. Hope this appeal will receive your due attention.