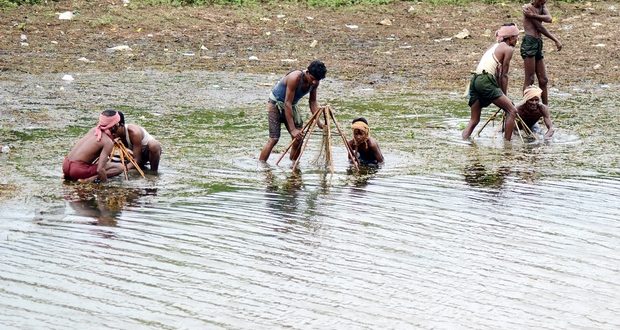 132 Cases Against Prawn Cultivators For Land Encroachment In Odisha

KENDRAPADA: In order to free the areas encroached by prawn cultivators under the revenue circles of Rajnagar block in Odisha’s Kendrapada, the Rajnagar Tehsildar has identified illegal Prawn gheries and has already filed 132 numbers of  revenue land encroachment cases against the illegal prawn ghery owners.

Cases have been registered as illegal prawn gheries were  on rising at the revenue lands of Rajnagar block. The prawn mafias have been converting the government lands into lucrative prawn gheries by violating the norms in this regard, said Khirod Kumar Behera, tehsildar of Rajnagar.

He said the Revenue Inspectors(RI) of their respective Revenue circles had been directed to conduct an inquiry and identify the prawn gheries.

Acting on his direction, the RI conducted a filed survey in their respective revenue circles and submitted report in this regard.

As per the inquiry reports, it has been found that hundreds of revenue land had encroached.

Illegal prawn gheries have come up in 19 human settlements within Bhitarkanika Wildlife Sanctuary under Rajnagar tehsil. More than 355 prawn gheries have illegally set up in revenue land in the villages coming under Rangani, Talchua, Righagarh, Bhitaragada and Gupti revenue circles.

Most of the prawn gheries have come up in prohibited coastal regulation zone (CRZ) territory. The areas under Rangani Gram Panchayat, where the prawn gheries were set up falls under the wildlife sanctuary territorial limits. Provisions of clauses CRZ, environment protection law, forest conservation act are being flouted by the prawn mafias, stated Behera, the tehsildar of Rajanagar.

So far, the Rajnagar tehsildar has filed 132 encroachment cases against illegal prawn ghery owners for encroaching 137 acres of Revenue land in the first phase. The Rajnagar tehsil also collected Rs 1.94 lakh of revenue from the encroachers.