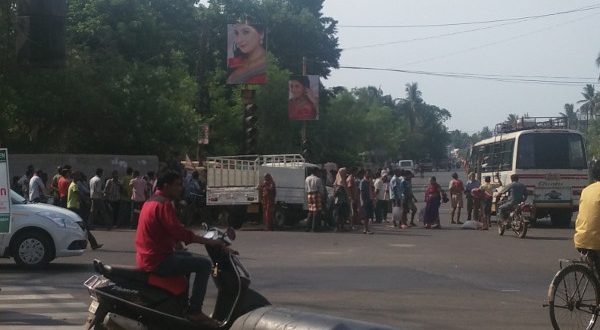 BHUBANESWAR: Commuters in Bhubaneswar were facing a harrowing time, here on Thursday, as auto-rickshaws began a day-long strike against companies like Ola Auto, Jugnu Auto.

The local auto owners claimed that these foreign companies were disrupting the local auto ecosystem. So they were going on strike and seemed determined to teach the private auto owners, who were promoting Ola or Jugnu, a lesson.

Many auto drivers were seen with lathis, iron rods in hands. They were pounding on autos which had the banners of Ola or Jugnu.

On CRPF Square, they stopped an auto bearing passengers, and asked the passengers to come out and thrashed the driver for loading passengers.

Notably, Ola Auto provides auto service at a much cheaper cost than the local auto, almost less than half the price.

When asked who do they prefer, a local waiting to go to Patia said “Ola is asking to pay only Rs 40, to go from CRPF Square to Patia, while the local auto walas are charging Rs. 200. Can you believe it? No doubt we choose Ola”.

But in their battle for running autos in the town, we the common people were facing a great deal of suffering, in this unbearable heat.

More, Odisha Govt. has only a few town buses to facilitate transportation in the town.

Probably its time Odisha Govt. pays attention to the needs of the ‘Janata’, for proper transportation service, rather than using our money for riding choppers at the cost of Rs 29.51 Cr.