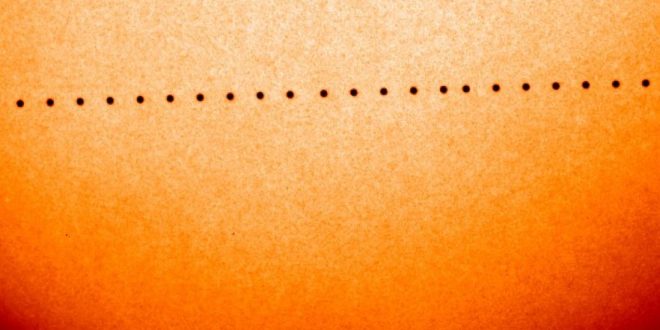 Transit Of Mercury Can Be Witnessed At Pathani Samanta Planetarium

BHUBANESWAR: A projection facility has been set up at the Pathani Samanta Planetarium in the capital city of Odisha for astronomy enthusiasts to observe the transit of Mercury across the face of the Sun.

This is the third such celestial event of the 21st Century.

“Mercury will appear like a mole as it passes before the Sun. But the whole event will be visible only if the sky remains clear,” said an official of the planetarium.

Transit of Mercury is the event which occurs when Earth and the planet come in line with the Sun.

The planetarium authorities plan to project the event between 4.30 pm and 5.45 pm, but could cancel it if cloudy weather prevails.

Dr Suvendu Patnaik, the deputy director of Pathani Samanta Planetarium, explained the course of the astronomical event. He said the transit of Mercury would begin at 4.42 pm and end at 12.12 am. In India, people will be able to see the first and second phases of the transit.

But they cannot see the third and fourth phases as the Sun sets at 6.06 pm, he added.

The next such event will take place November 11, 2019, which will be only partially visible in India. And the next completely visible transit would be on November 13, 2032.

The transit of Mercury begins as the planet touches the eastern hinge of the Sun’s face. It will transit to the western edge in more than seven hours.

Patnaik said the people of West Europe, West Africa, and South America would witness the complete transit while countries such as Australia, East Russia, Japan and China will witness partial transit.