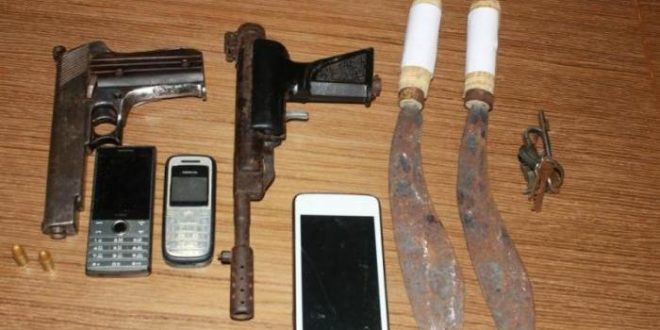 KORAPUT: Three dacoits have been nabbed while they were planning for something big, said Koraput Sadar police on Sunday.

Police have recovered an imported pistol, five round of live ammunition, six mobile phones, Rs 2.50 lakh cash, two sophisticated knives and one Bolero vehicle has been seized from their possession.

During the late hours of Saturday night, Jeypore Sadar IIC Govind Chandra Buruda got information that a gang of dacoits are planning for robbery in the nearby areas.

Basing upon the information, the police raided near the Umuri to Distillery area of Jeypore Sadar limit. A team led by S.I Pradhan and S.I Devta nabbed the dacoit gang of six members.

The dacoits were identified as Rambabu Pangi of down camp area of Jalaput, Sonia Naresh of Muchingput (AP), presently residing at Jalaput and Ranga Bahadur of Neheru Nagar of Jeypore town. Police are now checking whether they bear any other former crime record too.

During interrogation, it was clear that before this incident the gang was succeeded in a loot that taken place on the National Highway. A group of people paddling illegal ganja were threatened by these gang members. By gun point these dacoits looted 2.50 lakh from the ganja paddlers, as confessed by the dacoits, police said.

Police are now investigating the Ganja paddlers targeted by the looters and also the involvement of the bolero owner in the case too.