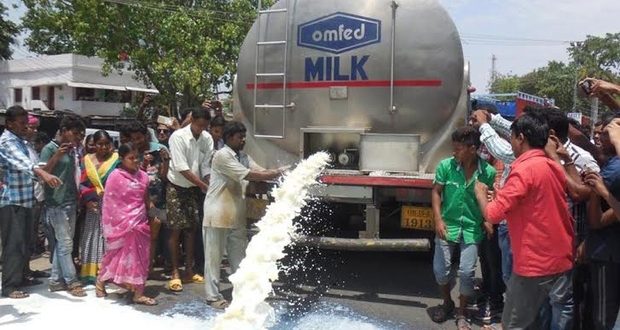 BHUBANESWAR: A delegation of Odisha Milk Farmers Association led by its chairman Rabi Behera on Wednesday met Chief Secretary Aditya Prasad Padhi and urged him to include milk and milk products in mid-day-meal being provided to school children in the state.

They said the scheme would check distress sale of milk in the state.

They also demanded all the Hospital and Medical Colleges of the state may be directed to provide only OMFED milk and milk product to their patient and the government should immediately issue a directive to them.

It can be noted here that 2.77 lakhs milk farmers every day give around 6.25 lakhs of milk to OMFED, which has slashed the procurement by 31%. As a result, the milk farmers of the state are losing Rs. 52 lakhs every day and sometimes the OMFED is going for milk holiday in every ten days for which the farmers are losing almost Rs. 1.5 crores on that day.

When 235 blocks are reeling under severe drought affecting 1.6 crores of the population of the state, milk production is an alternative livelihood of the drought affected farmers in rural Odisha, they said.

But this man-made action has thrown the livelihood of 2.77 lakhs milk farmers family into danger and being helpless they have come to the street and protesting by pouring milk.

The Chief Secretary has assured the delegation to take a positive step in this direction.

The association also demanded bank loans at Rs. 2% per annum. They also demanded Minimum Support Price (MSP) of Rs. 30 per litre of milk and a pricing committee like that of paddy and wheat to fix up the MSP for milk.

The Chief Secretary has assured to take of the matter at the inter-ministerial meeting for checking distress sale of milk.