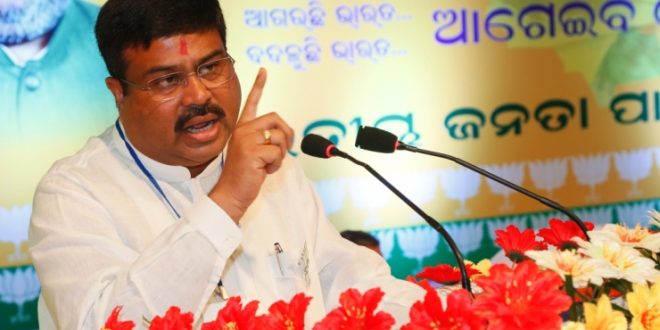 SUNDARGARH: Union Petroleum Minister Dharmendra Pradhan on Sunday said due to inefficiency and stagnancy of the Odisha government, development is not reaching out to the people in the grassroots level.

He said the people are not getting the benefits of different welfare schemes due to the incompetent state government.

Pradhan, who attended the concluding day of state executive meeting of BJP at Sundargarh,  called upon the party workers to go to people highlighting the welfare programmes and schemes initiated by the Narendra Modi-government at Centre.

With the state government criticising the Centre on the increase in petroleum price, the Minister said Odisha is charging 26 percent as state tax, which is one of the highest in the country.

“Due to crude oil price slash out of the total saving, 50 percent is passed on directly to the consumers. Centre returns 42 percent of remaining amount of tax collected to state governments. Rest is used to take care of development works like water supply, power, housing, roads and other needs,” said Pradhan.

Notably, the ruling BJD on Friday held a demonstration protesting against petrol and diesel price hike.

Pradhan said the Prime Minister in last two years had taken important and decisive steps for poor and downtrodden of the country including Odisha.