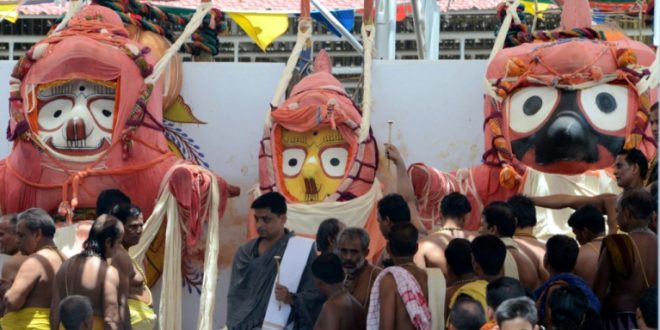 BHUBANESWAR: Opposition Congress and BJP on Monday launched a scathing attack at ruling Biju Janata Dal (BJD) over revoke of suspension on two servitors ahead of Rath Yatra (chariot festival) of Lord Jagannath in July.

The Shree Jagannath Temple Administration (SJTA) had suspended two Daitapatis and one prathihari servitor of Sri Mandir for their alleged involvement in the Nabakalebar fiasco last year. It, however, revoked suspension before submission of inquiry report into Nabakalebara fiasco.

“The state government had one year in hand to find out the guilty and punish. But, it did n’t act,” said BJP spokesperson Sajjan Sharma.

He said, “The government had suspended the servitors and given enquiry order to hide its fault.”

Congress leader Sarat Rout alleged that the state government which was responsible for Nabakalebara fiasco. He said it failed to facilitate the timely conduct of Brahma Parivarthan ritual.

However, BJD spokesperson Samir Ranjan Das said that government has no role in the withdrawal of suspension order.

“lifting suspension of the three was done by the SJTA to ensure smooth conduct of the Rath Yatra,” he said.

After the SJTA revokes suspension, Kasinath Dasmohapatra and his son Jayakrushna took part in the rites and rituals Debasnana Purnima on Monday. They were under suspension for their alleged involvement in Brahma Paribartan fiasco.

SJTA also revoked Artatrana Pratihari, a member of Pratihari Nijog. It had suspended him last year for allegedly violating the high court order and escorting a woman devotee to climb atop the chariot of Lord Jagannath.