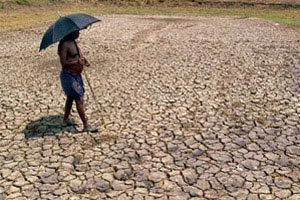 BOLANGIR: Agricultural activities in Balangir district is yet to take up this year as the monsoon is playing hide and seek game in the state.

The district has received only 21mm rainfall this year where as the normal average rainfall is 202mm, a deficient of 90percent, said an agriculture official.

Paddy cultivation this year was targeted to take up in 1,85,000hectares. However, the cultivation has not been taken up at all.

Similarly, cotton crop was scheduled to take up in around 36000 hectares. The cotton crop is a 150 days crop. The delay in sowing is directly correlated with production. The sowing of cotton seed should be over by June 30.

With barely ten days left for June 30, the fate of cotton crop in the absence of rain is looking bleak, said the official.

In the case of paddy, neither sowing nor transplantation of paddy has taken up. Last year erratic and inadequate rainfall had created water scarcity. This year, the absence of rainfall has further accentuated the water crisis in the town and village area.

THE shortage of water has also affected plantation activities in the district.

Interestingly, as per the provisions of the forest department, plantation activity under some schemes to be completed before June.

But in the absence of monsoon rainfall,  paddy cultivation and other activities including plantation has come to a standstill.