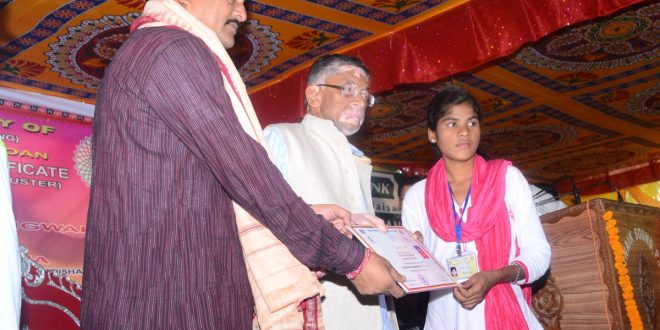 In the function held in the village Birjam under Sohela block, the Minister also gave away the certificates to pass outs of the first Handloom Entrepreneur training course.

Gangwar said that the Central Government is implementing several new initiatives aimed at raising earnings of handloom weavers to Rs. 500 per day.

He also said that the Government is giving special priority to handloom weavers belonging to Scheduled Caste.

Out of more than 600 weavers who will be benefited by the block-level cluster project in Sohela, 90% weavers belong to the SC category. The Minister added that the Ministry of Textiles has requested state governments to send projects of blocks that have concentration of SC weavers, on priority.

Bargarh area of Odisha is a large cluster of handloom weaving and is famous for tie and dye Ikat weaves. It has produced a large number of national awardees.

Block level cluster project is the new approach adopted by the Government for comprehensive development of handloom weavers. Under this, a project can avail assistance up to two crore rupees, for activities such as skill upgradation, loom upgradation,  work sheds, professional assistance from a designer, common facility centre, dye house and a raw material depot.

Government has sanctioned 228 such projects in the last one year, 19 of which are in Odisha. Handloom weavers receive a wage compensation of Rs. 210 per day from the Government, during the training period.