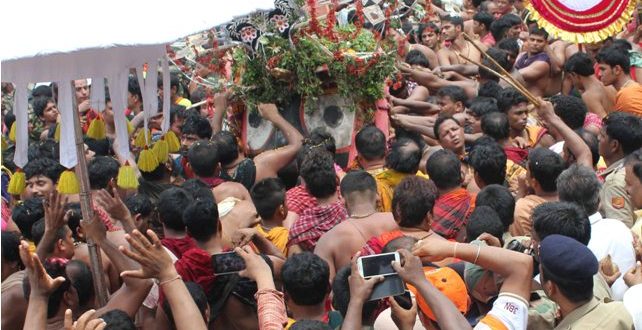 KENDRAPADA: The Rath Yatra of Lord Baladevjew at Tulasi Kshetra of Kendrapara district passed off peacefully as thousands of devotees thronged to witness the annual festival here on Wednesday.

The Pahandi Bije of the three deities Lord Jagannath, Lord Balabhadra and Devi Subhadra to decorated wooden chariots started after 2 pm from the sanctum sanctorum.

Later, the traditional Chhera Panhara was performed by Raj Purohit and devotees pulled the Brahma Taldwaja Ratha. The chariot was stopped near the temple Endowment office as per the rituals.

The chariot would be pulled to Mausima Temple on Thursday.

Tight security arrangements were made to ensure the safety during the Ratha Yatra. The District collector, Debaraj Senapati, and other senior officials monitored the situation by remaining present at Ratha danda.