Bhubaneswar: In a shocking incident, a man was injured critically after he was fired at by his daughter’s lover in the presence of police near Laxmi Sagar police station here on Sunday.

The incident took place while the victim was settling a dispute over his daughter’s love affair in presence of police officials.

The accused has been arrested and the weapon has been seized by the police.

The injured person was admitted to Capital hospital immediately. However, he was shifted to a private hospital after his condition deteriorated. 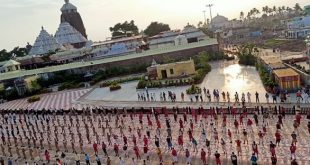