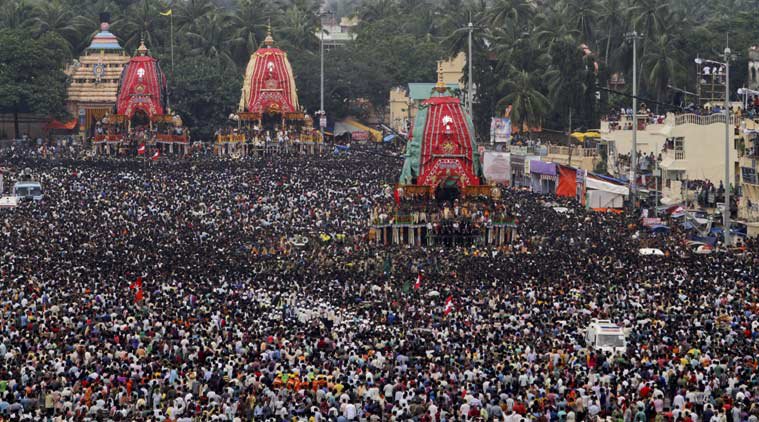 Puri: The world famous Rath Yatra of Lord Jagannath was held in the pilgrim town Puri on Sunday with religious fervour and enthusiasm amid tight security.

Lakhs of devotees from across the country and abroad descended on the holy town to witness the nine-day journey of Lord Jagannath, Lord Balabhadra and Devi Subhadra to the Gundicha Temple and back to their abode.

The Pahandi of the deities began at around 10.30 am when the holy trinity along with Lord Sudarsana were taken in a procession to their respective chariots parked in front of the temple as the entire Bada danda reverberates with the sounds of ghanta (cymbals), kahali (type of shehenai), mahuri (a double reeded instrument), pakhauja (variant of mridangam), mardal (similar to pakhawaj), telingi baja, etc.

After the deities are placed on their respective chariots, Puri King Gajapati Divyasingh Dev performed Chhera Panhara on the chariots.

Spirituality is at its peak on the Grand Road here as the grand and colourful chariot of Lord Balabhadra began rolling with a sea of devotees pulling the Taladhwaja Rath. Soon after, Debadalana chariot carrying Goddess Subhadra and Nandighosha chariot of Lord Jagannath were also pulled by devotees. The chariots of Goddess Subhadra and Lord Jagannath also pulled by the seaof devotees.

This has set off the nine day vacation of the deities to their aunt’s house at Gundicha temple.

As the chariots of the three deities reach half way, they stop their journey to continue it on the next day. Taladhwaja stops near Balagandi, Debadalana near Bagala Dharmashala and Nandighosha near Town Police Station. The journey will resume at 9 am on Monday, while the preparations will start from 8 am.