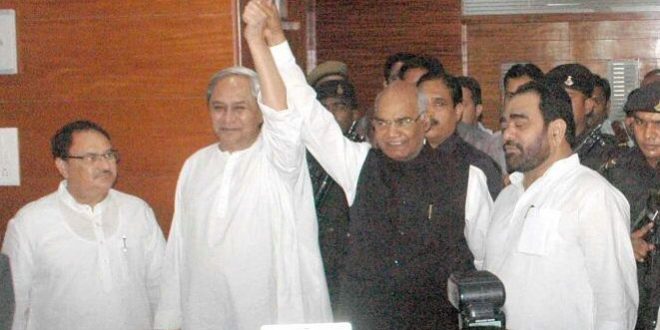 Bhubaneswar: NDA’s presidential candidate Ram Nath Kovind on Friday met the lawmakers of BJD and BJP seeking to vote his candidature in the coming presidential elections.

After arriving in the Odisha capital along with Union Health Minister JP Nadda, Kovind met BJD MPs and MLAs at the conference hall of the State Assembly.

Kovind also addressed the legislators and the MPs in the presence of Chief Minister and BJD supremo Naveen Patnaik.

He then headed towards Naveen Nivas, residence of the CM, where he had lunch.

Kovind told media persons, “I am happy to be here and grateful for the full fledged support of BJD to my presidential candidature,” adding that the lunch was very tasty.

Speaking about the meeting at the Assembly conference hall, Patnaik, said, “Kovind requested BJD MPs and MLAs to vote him during the Presidential poll.”

Replying to a query on chances of cross voting, Patnaik said, “I don’t think that will happen at all.”