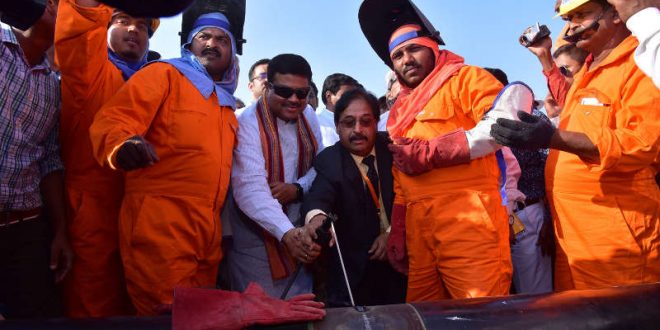 Bhubaneswar: Marking another significant development in the spread of the Pradhan Mantri Urja Ganga in Odisha, Minister for Petroleum and Natural Gas Dharmendra Pradhan on Sunday laid the foundation stones for new Dhamra-Angul gas pipeline and Bhubaneshwar-Cuttack-Paradip spur line in Sukinda of Jajpur district.

On this occasion, Pradhan said this 600 km long natural gas pipeline project is a new year gift for the people of coastal districts of Odisha from the central government.

He said that foundation stone for the LNG Terminal at Dhamra with an investment of Rs. 6000 crore has already been laid recently.

Gas will be imported from countries like Australia, Katar in cape size vessels and supplied to Allahabad of Uttar Pradesh through 2500 km long pipeline. Out of that 600 km long natural gas pipeline will be constructed in Odisha covering 13 districts-Bhadrak, Jajpur, Dhenkanal, Angul, Sundergarh, Sambalpur, Jharsuguda, Debagarh, Jagatsinghpur, Cuttack, Khordha, Puri and Kendrapara.

This longest pipeline project is a major step towards the fulfilment of Prime Minister’s dream of developing a gas-based economy and linking Eastern India to the country’s Natural Gas Grid. It will pave the way for development of high-quality manufacturing in Odisha- Dharmendra Pradhan

He said this will add more values to the minerals of Odisha.

As of now, steel produced in Odisha was limited to the construction of houses and angle making. But now the steel and aluminium which will be produced in Odisha using gas will be of high quality and lead to manufacturing of automobiles and Odisha can be a centre of high-quality steel production, said the Petroleum Minister.

Stating that Tata is using natural resources of Odisha for a long time, he said the company should come forward to manufacture heavy vehicles like trucks in Odisha using this natural gas.

It may be noted here that, as part of this pipeline project, Pradhan had inaugurated supply of Compressed Natural Gas (CNG) and CNG-run scooters in Bhubaneswar on Saturday.

The Minister inaugurated CNG stations in Chandrasekharpur and Patia in Bhubaneswar. Two more stations are being constructed in Khandagiri and Tamando. Over the coming years, 25 CNG stations will be commissioned in the twin cities of Bhubaneswar and Cuttack to supply CNG to vehicles.

Initially, natural gas will reach Bhubaneswar in special containers called “cascades” which will be transported by road from Vijaywada in Andhra Pradesh. Later, Natural Gas will be supplied through the 2655 km long Jagdishpur-Haldia & Bokaro-Dhamra Natural Gas Pipeline (JHBDPL), popularly known as the Pradhan Mantri Urja Ganga.