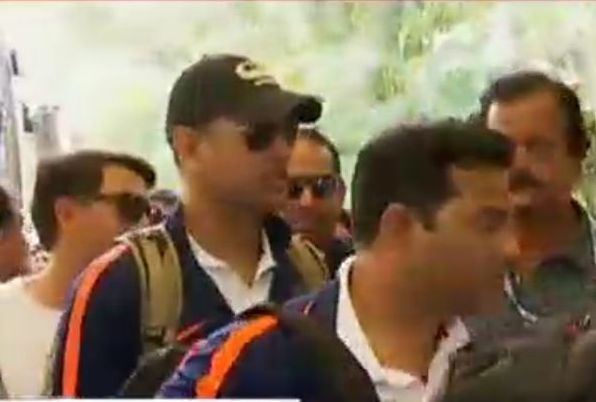 Bhubaneswar: Players of Indian and Sri Lankan cricket teams on Sunday arrived in Bhubaneswar for the T20 cricket match scheduled to be held at the Barabati stadium in Cuttack on December 20.

The players reached Biju Patnaik International Airport (BPIA) here from Visakhapatnam in a special aircraft and were escorted to Hotel Mayfair in the city amid tight security.

As per the schedule, they will go to the stadium on Tuesday for the practise session. As many as 50 rooms of the hotel have been booked for the players, supporting staff and match officials, said sources.

Renowned sand artist Sudarsan Pattnaik has created a sand art at the Bhubaneswar airport to welcome the players of Indian and Sri Lankan cricket teams.

Welcome to Odisha: My SandArt at Bhubaneswar Airport to Welcome both the teams for next #T20 at Barabati stadium in cuttack, Odisha between India 🇮🇳 and Sri Lanka 🇱🇰 #INDvSL pic.twitter.com/WjpJRQcPqH

The Commissionerate police have made elaborate security arrangements in the twin cities of Bhubaneswar and Cuttack for the India-Sri Lanka T20 cricket match.

“63 platoons of the police force will be deployed in Cuttack and 18 platoons will in Bhubaneswar. CCTV cameras have been installed in every entry and exit points of the stadium through which we will be able to keep a close watch on the spectators,” said Police Commissioner YB Khurania.