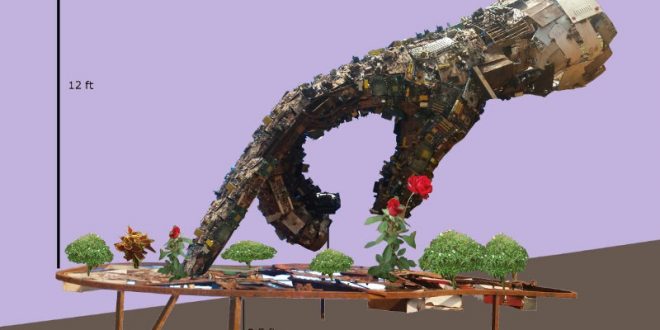 Bhubaneswar: Concerned at the alarming rise of e-waste burden in the city, Bhubaneswar Municipal Corporation (BMC) in association with its implementation partners SDRC and Sofies Sustainability Leaders Pvt Ltd will install e-waste sculptures soon across the city in order to create a massive awareness among citizens.

It can be mentioned here that rock gardens, made out of various wastes, have already become major tourist attractions in many cities across the country.

As per the Waste Management Rules, 2016, the E-wastes should be scientifically stored and dismantled as their unscientific management leads to pollution and various environmental hazards.

The two sculptures will be placed at two major locations. These installations would be part of Clean E-Bhubaneswar Project under IFC-EU Eco-Cities Programme.

The clean E-Bhubaneswar project is a joint initiative of International Finance Corporation-European Union Eco-Cities Programme and Bhubaneswar Municipal corporation. As a part of the project, the two E-waste sculptures are being planned to be installed in the Temple City.

While one sculpture is with a theme ‘Hand pointing to the ground’, it gives the message that we need to reconnect with Mother Earth by being responsible in the scientific management of Electronic Waste (E-waste) and recycling it in a sustainable manner.

The second sculpture is named as ‘Raavan’. This sculpture gives the message that we would need to be responsible in the management of E-Waste by following the principles of reduction, reuse, repair and recycle. The naming of the sculpture as per the mythological character explains that if we ignore the issue, one-day E-waste could also become a demon like Raavan and do harm to the human race.

The international report also shows that the amounts of E-waste continue to grow, while too little is recycled. By 2016, the world generated 44.7 million metric tonnes (MT) of E-waste and only20% was recycled through appropriate channels.

Panigrahi also informed that the ‘Hand pointing to the ground’ sculpture, made by well-known city-based artist Veejayant Dash is ready and was first displayed at 16th Anjali International Children’s Festival in the city and was unveiled by Development Commissioner R. Balakrishnan. The beautiful sculpture summarizing the philosophy of life that everything finally gets mingled with the Mother Earth will be installed at Power House Square.

The second sculpture titled ‘Raavan’, for which the drawings are already finalised will be placed at Jaydev Vihar Square.