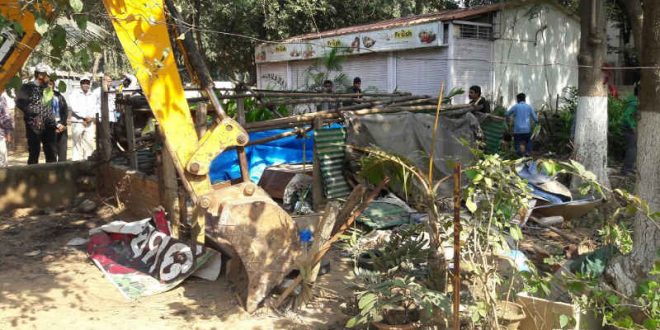 Around 5,000 square feet of the area has been made encroachment free adjacent to Udyan Fresh store with this action at this place.

The drive along Sachivalaya Marg started yesterday in the presence of Municipal Commissioner-BMC-cum-Vice Chairman BDA near Housing Board Square, wherein senior officials of BMC & BDA joined the drive.

During yesterday afternoon as per the instructions given in the presence of VC BDA, Enforcement Squad removed all unauthorized hoardings from Sachivalaya Marg from Acharya Vihar to AG Square.

It can be mentioned here that yesterday morning unauthorized hoarding removal work was also carried out on the road from City Women’s College in Jagamar area till Gandamunda and up to Pokhariput area.

On January 2, a joint squad of BMC and BDA removed illegal hoardings and flags from various stretches across the city, including `No Hoarding Zones’.

This enforcement action, which continued for the entire day collected a massive three truckloads of materials including flags and hoardings of various political parties, New Year welcome messages put up by several organisations, institutions and political aspirants.

The joint squad worked along Sishu Bhawan to New Airport Square, New Airport to Ravindra Mandap Square, AG Square to Raj Mahal Square, Rajmahal and Master Canteen area and Rajmahal to Kalpana Square area. During the drive around 250 small and big hoardings were removed on the first day of action for BMC-BDA in the New Year.

It can be mentioned here that aiming to keep the city skyline clean, without any unauthorised hoarding, BMC convened a meeting of all political parties on Saturday last, in order to have a consensus on the effective implementation of hoarding regulations and policies.