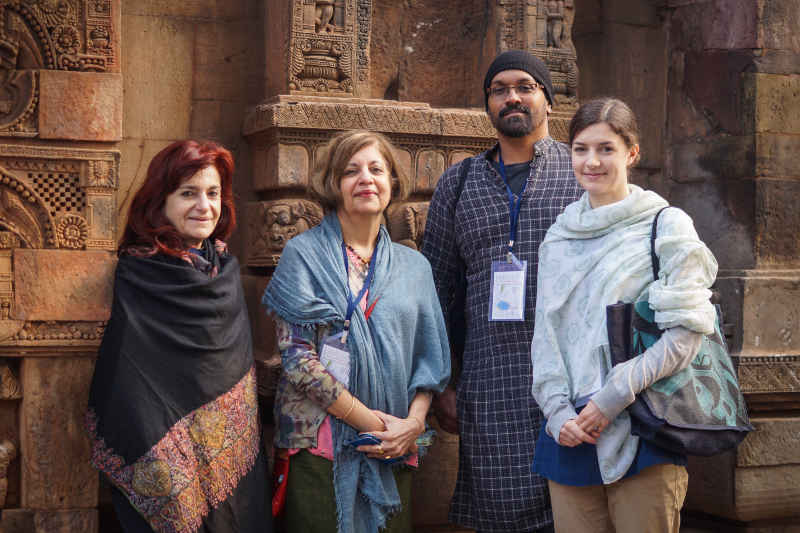 Bhubaneswar: On the auspicious Makar Sankranti day at the 57th Ekamra Walks, it was Odissi, Odissi and Odissi.

While the starting point of entire Mukeswar Temple and its backdrop got a new look for the Mukteswar Dance Festival, four Odissi dancers from UK and Brazil were among the heritage walkers. All are in the city to see the festival.

Katie Ryan, Kali Chandrasegaram and Sanjeevani Dutta, all disciples of Guru Shankar Behera of Mumbai participated, Beatriz Ocougne from Brazil, a dance guru herself in Brazil took an active interest in understanding the temple art, architecture and the sculptures.

Sanjeevani led the UK team of dancers and they were to meet Guru Shankar Behera while attending the famous dance festival of classical dance, which is quite popular among the Odissi dancers from India and world as it is being held against the lovely backdrop of majestic Mukteswar Temple, known for its unique arch and also intricate carvings.

While Katie was introduced to Guru Shankar Behera by Sanjeevani at an early age in London, Kali first learnt Odissi from Geeta Shankar in Kuala Lumpur in 1996 and then moved to London and now has interests both in contemporary and Odissi dance forms.

Kali, however, learnt Bharatanatyam from Radha Shetty at Temple of Fine Arts in Kuala Lumpur, before learning Odissi.

Sanjeevani was overwhelmed at seeing young boys and girls taking an active interest in learning about heritage and culture.

“It is across the entire South East Asia, where locals are not much interested to know things about their rich heritage and culture. I am happy that local civic and development authorities and Odisha Tourism are continuing the nice effort week after week and this would definitely help our next generation to take notice and have more knowledge on the heritage of the Temple City. This is a commendable job,” she added.