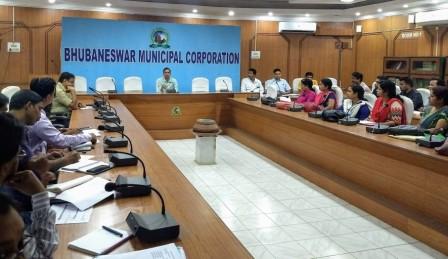 Bhubaneswar: In order to fight the open defecation menace, Bhubaneswar Municipal Corporation (BMC) has taken up a strong stand to strategise its efforts to stop people from using open grounds as the toilet and thus march towards a cleaner and healthier atmosphere.

While it has been decided to levy a fine of Rs 50 per person for defecating in the open, a massive awareness-cum-behaviour change communication (BCC) drive will be implemented soon across the city to declare 13 wards, open defecation free (ODF).

Additional Municipal Commissioner Subham Saxena presided over a meeting, which was also attended by Deputy Commissioner Sanitation Lalatendu Sahu, Zonal Deputy Commissioners Binay Kumar Dash, Subhranshu Mishra and Diptirani Sahu and called for a target-oriented plan so that the objectives would be achieved in a time-bound manner.

Community Organisers, officials of BMC and different other line departments of the State Government and members from Swachh Bhubaneswar Abhiyan Cell and Communication Cell, were present at the meeting.

It was also decided that BMC will construct community toilets within 500 meters distance of slums if some households having no land to construct individual household latrines.

The urban local body will construct public toilet within 1 km distance of each commercial area across the city. Citizens can also use the toilets inside all fuel pumps in the city.

Across the Temple City, 55 self-help group (SHG) federations shall motivate and ensure construction and use of sanitary individual household latrines and persuade SHGs to submit ODF Declaration.

In order to tackle defecating due to events and exhibition, five numbers of mobile toilets shall be procured to tackle the situation. Interestingly, 470 schools within BMC area shall ensure sanitary toilets at their school premises and would submit ODF declaration by the schools.

All Resident Welfare Associations shall ensure ODF and submit ODF declaration for the non-slums area. The ward officers/sanitary inspectors will have to identify insanitary toilet in non-slums areas.

In the meeting, different success stories in order to make some slums ODF inside the Smart District area and outside were also discussed to get more ideas so that entire wards would be taken up for the first phase. The phase-1 will include 13 wards.