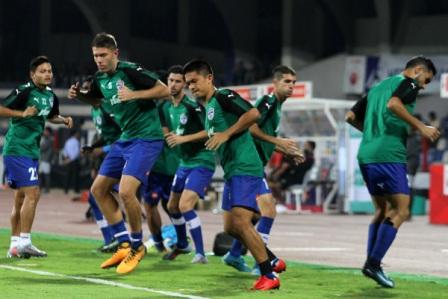 Bhubaneshwar: Having crawled their way into the top four places after a slow start to life in the Hero Indian Super League, Jamshedpur FC has a chance to take another giant leap when they take on league leaders Bengaluru FC at the Kalinga Stadium, Bhubaneswar, on Sunday.

With just two games left for them to play, a win over Bengaluru FC may not lock the spot for Jamshedpur FC in the playoffs as yet, but it will give them some respite approaching the final game and put pressure on the chasing pack of Kerala Blasters and FC Goa, both of whom will be keeping a keen eye on game.

Even though recognizing the importance of the game at hand, Jamshedpur head coach Steve Coppell, however, feels it’s not a “do or die” situation for his team.

“We have been in that situation for the last five games where people have said it is, and we have done fairly well in such situations.  So, we are looking forward to the game and relishing the challenge,” he said at the pre-match press conference.

Steve Coppell’s men have been in red-hot form in recent weeks picking up 10 out of possible 12 points in their last four games in the ISL. Commenting on their good form Coppell said, “In the first half of the season, we had a lot of draws and in the last 5-6 games, we have managed to convert those draw into wins.”

Even though Bengaluru FC have already sealed a spot in the playoffs, their coach Albert Roca believes his team needs to keep up the winning momentum going into the playoffs.

“We have to put in a strong performance in the final two games in the league because that will help us be ready for the playoffs. We must also remember that we play the AFC Cup games in between the playoffs so we can’t take any game easy,” the Spanish tactician said at the press conference.

Having gone down to Jamshedpur FC at home in the reverse fixture between the two sides, the Blues will also be looking to take the game as a chance to redeem themselves.

Speaking about his opponents for Sunday’s clash, Roca added, “Jamshedpur FC know that they need a good result tomorrow to seal their playoff berth. So, we are expecting a good and tough game.”

There is a huge contrast between how Bengaluru FC and Jamshedpur FC play their football. While Bengaluru have the best attack, having notched up 31 goals, the host have managed to keep the cleanest sheets in the ISL. It will be interesting to see who comes out on top when they go head-to-head on Sunday.